It seems like Patrick McHenry has had the worst week in his entire life. Not only did he experience opponent Lance Sigmon's wrath with his "two bit" comment at a GOP dinner, but he also faced the wrath of web-savvy Veterans as they locked into his "Response" video to the "two bit" comment, showing how Patrick McHenry's publicity stunt video attempt to gain voter sympathy ended up endangering lives in Iraq. Even Keith Olbermann has had a field day, "Bush"ing McHenry not once, but TWICE in a single week. However, there seems to be some confusion as to what the true nature of McHenry's blunder is- everyone knows he screwed up, just not exactly why. And I can tell you what that is in one word:

Well, we already somewhat knew that. Patrick McHenry has long had a history of having his rear kicked publicly and being embarrassed, but the problem is, it's never really been enough to convince 10th District Republicans that their beloved "perfect voting record" congressman is, in fact, an idiot. Admittedly, it would be hard for them to do so- most voters don't realize that Patrick McHenry is the perfect blank canvas, simply picking up the latest GOP position paper and screaming it while even his fellow party members in Congress shake their heads and press face to palm in shame.

We can thank ourselves that Patrick McHenry seemingly loves to generate his own bad publicity. Without going into recent events too much (I've already done that), I think we should examine more closely the true nature of Patrick McHenry's video. Having personally acquired it through some connections, it's time to clear the air: I'm going to explain not only what McHenry did, but why what he did is such a red flag in the world of war.

First off, the video. In the video, Patrick McHenry makes a quick spiel- pointing specifically at locations that were attacked, giving the specific date and a general location. McHenry also makes a quick note about being denied access from the Gym for not having proper ID (because "I'm a Congressman! I'm special dammit!" is not a proper argument to avoid Military protocol), and makes his typical "I'm a good old Christian boy" rant that he occasionally whips out when he thinks his bible-belt district wants him to.

That's it. So what's the problem?

First off, let me say that this video is haunting in that one of our fellow BlueNC bloggers, lauraroslin, pointed out that there were actually three deaths as a result of that gym attack, and McHenry was damned lucky that he wasn't number four. We don't want anyone to die in Iraq, even McHenry- but that leads me to my second point.

McHenry's major sin was giving information (and distinctly pointing) where blasts hit. In essence, what Patrick McHenry did (and Keith Olbermann alluded to) was play a very bad game of Battleship with artillery gunmen terrorists. You see, when teams fire missiles at anything (in this case, from the enemy standpoint, the "Green Zone" with somewhat unknown terrain/features/important locations), they pull some complex guesswork to determine where they hit- much like people play Battleship, just more complex. Without knowing specific landmarks and important locations (such as, say, a barracks or a weapons depot), they simply guess and fire randomly, hoping to hit something of value. Thankfully, they rarely get it right.

However, when people like McHenry step in, it's like providing a loose map of destruction and what they can do to make their aim better. What would happen, in our little analogy, if I was open with my opponent in Battleship- with statements like "Oh, you missed me, you need to go three spaces right"? I would lose. It's because then my opponent would know exactly where to hit, and more importantly, how to make those hits hurt worse.

Patrick McHenry, in his little publicity stunt, did just that. In providing information regarding what the missiles hit, pending the enemy would have any form of information about the base (or a rudimentary map, even), they could reasonably determine what to hit. Unfortunately, this means that future missile attacks will more than likely be more accurate, more planned, and much much more deadly.

That's exactly why the Pentagon and the DOD (Department of Defense) are pissed at McHenry, that's exactly why he's pulled the video, and that's exactly why he's probably crying in a corner right now. Patrick McHenry, despite his pro-war sentiments and his "perfect voting record", has done something much worse than a bad advertising campaign or voting anything but strongly Republican (Good God!)- he's placed real human lives in danger by doing a publicity stunt. 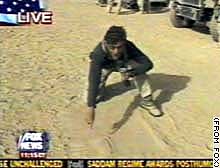 So what does that have to do with Geraldo Rivera? In 2003, Geraldo made one of the dumbest moves he could have ever made whilst following the Army's 101st Air Unit in Iraq- he got on the ground, on national television, and proceeded to draw in the sand a relatively detailed map of a future military operation. In this little stunt, Geraldo, in a dumb publicity stunt (sound familiar?), provided the enemy a plan of attack, and thus endangered the 101st beyond what they would have normally expected.

Geraldo, of course, was eventually removed from Iraq, and the world learned a very important lesson about the face of reporting and the face of war. Much like his other fiascoes (Al Capone's Vault comes to mind), Geraldo Rivera did something stupid and over-hyped his own importance- except in that case, Rivera endangered soldiers, whereas with Al Capone's Vault, he just looked stupid and wasted some of our time.

The connection here is that they both did the same thing: take a publicity stunt and an attempt to seem "knowledgeable" and "on the front lines" and turned it into an atrocity that endangered those who actually belonged there. Geraldo Rivera and Patrick McHenry both only had very loose reasons for being in Iraq- Rivera to pretend to report, and McHenry to pretend to learn- but both of them screwed up. They let their egos go to their heads, ignored military policy, and have now caused the military excess stress and anguish trying to fix their problems.

Just like Geraldo Rivera was kicked out of Iraq, I think Congressman McHenry needs to be kicked out... of Congress. McHenry has done something that has gone beyond his position- he has done something so atrocious and, in my opinion, horrible, that he should not represent ANYONE, let alone the citizens of the 10th District, of which I am one. We do not deserve to be represented by a man who is so egotistical and self-centered that he is willing to endanger American soldiers fighting in Iraq so his political career could be potentially bolstered.

I won't end this with anything but a simple request. Check out those running against Patrick McHenry. Both Daniel Johnson and Steve Ivester are Democratic candidates to ensure that McHenry is excised from this district like the cancer he is. If you are a Republican reading this blog (yes, I know you do read this), Lance Sigmon is a Republican candidate running against McHenry, and probably the 10th's best chance at defeating McHenry (as once McH gets past the primaries, we're toast). Check them all out. Read their position papers. And make sure this egotistical Geraldo Rivera clone in Congress never embarrasses the 10th again.