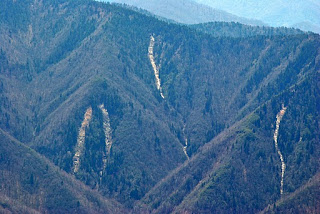 These maps will show which areas are prone to landslides and that will help developers, county officials and residents decide where to safely build homes, roads and other structures.  Governor Mike Easley Press Release October 2006

With the passage of the Appropriations Act in June 2011, the North Carolina General Assembly defunded the Western North Carolina Landslide Hazard Mapping Program.

Two years prior to this action, May 2009, the North Carolina Association of Realtors advised members and other interested parties that its lobbying efforts to stay the Safe Artificial Slope Construction Act had been successful. The bill's intent was hazardous-land disclosure and control over Western North Carolina steep-slope development practices.

In July 2011 the Franklin, NC-based law firm of Coward, Hicks and Siler received a NCREC letter indicating that landslide hazard maps are not necessarily material facts. The North Carolina Association of Realtors had this response:

It has been brought to the attention of the North Carolina Association of REALTORS® (NCAR) that conflicting information about the North Carolina Real Estate Commission’s (NCREC) position with regard to the disclosure of landslide hazards and landslide hazard maps has been repeatedly expressed in the public domain. The letter found here from Mr. Tom Miller, Legal Counsel for the NCREC, is intended to clarify any conflicting information and provide western North Carolina REALTORS® and their clients with certainty regarding past, pending or future transactions. This is a complicated topic that is hard to distill in one paragraph, but here are Mr. Miller’s points in summary:

1). The mere existence of the landslide hazard maps is not in itself a material fact that must be disclosed.

2). The NCREC does not currently require brokers, as a minimum standard of practice, to investigate slide hazards and warn clients of the potential for such hazards in absence of actual knowledge or the existence of circumstances that would lead a reasonably prudent broker to conclude that there is a potential hazard.

3). The NC Courts have also ruled that a real estate agent is under no duty to disclose unless they actually knew or should have known about a hazard on a specific piece of property.

We sincerely hope these materials will be helpful in clarifying much of the confusion regarding landslide hazard issues in western NC. We also strongly urge anyone with additional questions or concerns to follow up directly with the NCREC or with NCAR government affairs staff to discuss the issue further.

Additionally, although it may not be required by law or regulation, disclosing the existence of landslide hazard maps, together with information about how a consumer can access them, may be a good "risk management" strategy for a firm to consider adopting. A buyer who discovers the existence of a landslide hazard map after closing may threaten or possibly even take action against a broker involved in the transaction based on an alleged negligent or fraudulent failure to disclose the existence of the map. Although the Real Estate Commission or a court may well conclude that there is no basis for the claim, disclosing the existence of the map up front would make it more difficult for the buyer to assert such a claim in the first place. Whether a firm should adopt such a disclosure policy would be up to each individual firm, and any questions about whether the adoption of such a policy is advisable should be directed to the firm's own legal counsel.

Who sold these people these homes? I'd be pretty upset if I were a homeowner who was sold a home in a floodplain. I know North Carolina has some awesome views, but you can still enjoy the mountain ranges from a distance. While I feel for the people at risk, they should have known better. The lesson: Find a realtor you can trust.

is a hard commodity to come by. All the realtors I know are members of the North Carolina Association of Realtors, which is a disgusting professional organization by any measure. A regular person has to hold his or her nose to get past that affiliation before he or she can even consider the merits of any particular individual.