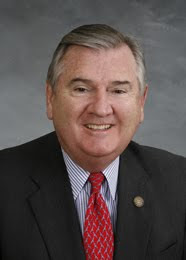 By popular demand and in light of Senator Rand’s decision to retire, here is the link to my original post from more than two years ago.

Perhaps Wayne’s World will hear from more personages - including the General Assembly’s own
Gerry Cohen, a commenter to the 2007 post – who fondly remember the occasion.

Of course, in light of the “haze” that settled over the Rockingham speedway before, during and after the mega-concert, many more guests may not recall anything at all. And for good reason.

And that doesn’t count the streakers.

Remember, it was the early ‘70s. Folks did that a lot back then.

I’m sure that all the attendees and the historic performers from North Carolina’s own version of Woodstock wish to thank Tony Rand of Cumberland County who, years before his entry into legislative politics, brought rock-and-roll to Rockingham. We haven’t been the same since.

I'll have whatever you're drinking.