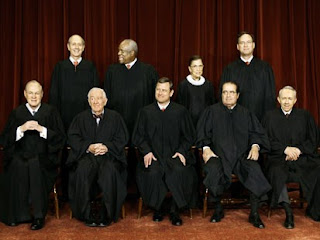 Though countless others have already analyzed and pontificated all sides of the main question, several questions bubble to the surface for me. Here are four interrogatories that came to mind right off the bat:

First, how is it that members of the Supreme Court majority in the Citizens United case - including Chief Justice Roberts - have preached "judicial restraint" and "honoring precedent" and "strict construction" of the Constitution for years and years, even testifying to Senate confirmation panels that such philosophy was their pole star, but in this case have become the activist court that they have heretofore demonized? Not only did the slim majority of the Court undo long-standing precedent going back 100 years to the days of Teddy (not Franklin) Roosevelt, but it ventured beyond the questions presented to it by the underlying Circuit Court. And I'm not the only one who noticed: Among millions of people were Steve Ford of the Raleigh News & Observer, who said:

Now, [Justice] Kennedy and his four like-minded colleagues had strained for reasons to disregard those precedents. That approach was the essence of over-the-top judicial activism - the bane of conservatives except when it serves their purposes.

(Coincidentally, the first letters of their surnames spells out exactly what type of Court opinion this was: It was a STARK contrast with precedent and judicial restraint.)

Second, how is it that Newt Gingrich and other conservative and ultra-conservative commentators, pundits, and Congressmen can say with a straight face, as they have already, that the Citizens United decision "levels the playing field" for citizens? Give me a break. The "citizens" they speak of are not individuals, but corporations. Yes, as an attorney, I know all the arguments and legalisms regarding corporate personhood, the 14th Amendment, et al. But levelling the playing field? No way. 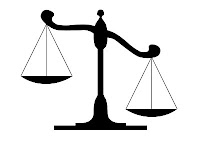 The vast super-majority of Americans cannot contribute the maximum to political campaigns. If and when they do contribute, it's most often in small amounts. Corporations, on the other hand, by virtue of this court decision, may dip into the millions and billions in their corporation treasury and engage in political activity with reckless abandon, and make unlimited contributions well above what the average John and Jane Q. Citizen could ever do.

And, on top of that, the decision presently leaves the door open for corporate executives to direct corporation monies to political campaigns with no input from shareholders. (And then there are the corporations that are not publicly traded, but privately held.) If anything, the Supreme Court didn't level the alleged "playing field" ... it tilted the field such that it resembles the Titanic, tip first, just before it sank into the Atlantic. 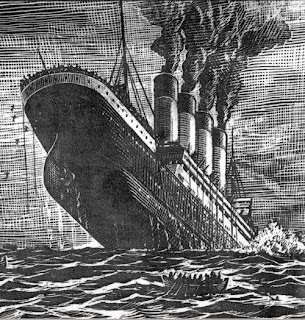 Third, what happened to the compelling state interest to prevent actual corruption or the appearance of corruption? A significant number of state attorneys general (including my Attorney General, Roy Cooper) addressed that very question in their joint amicus brief filed with the Supreme Court in the Citizens United case. The Supreme Court majority chose to ignore them and the fight against corruption. Picking up the Citizens United baton and carrying it further, like-minded conservative members of Congress feign concern by alluding to more instantaneous campaign finance reporting as the antiseptic to corruption. Even if you learn that your cause or candidate is being outspent $100 million to $1 by corporate cash (as opposed to contributions from individuals, live persons) and you learn about it instantly through online campaign reporting, what good will it do in stopping the appearance of corruption, of elections being bought and sold, particularly when those same corporations may very well own the news media which would normally be watchdogs for this sort of thing?

Fourth, why did the Roberts court and its Republican members make a decision that some persons say could threaten national security? By virtue of its broad decision, the Supreme Court's conservative majority may have very well opened the floodgates to foreign countries and foreign corporations - and terrorists? - attempting to buy American elections. (Why aren't there any conservative commentators frothing at the mouth on this? Speaking of froth, where's Dick Cheney?) Where are the folks who say national security and homeland security should be considered first and foremost? We've already seen companies and corporations go abroad and re-locate outside of the USA. But more than ever we've seen foreign interests come here and set up their own corporations. (Think China, for example.) The Court's decision, made in a way to upend the American political system in 2010 and 2012, may have put American elections up for sale to the enemy.

On a long ago post here at my Wayne's World blog I wondered what would Thomas Jefferson do if he surveyed America's political landscape today. 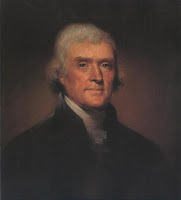 I suspect that if the Sage of Monticello knew about this Court's Citizens United decision, Jefferson would be quite angry.

As a courtesy to BlueNC readers, the above is CROSSPOSTED from Wayne's World.

Do you ever have conversations with your colleagues in Raleigh about blogging and such? It's remarkable that you seem to be one of the very few senior officials to use the power of your voice and soapbox to help correct our path forward as a nation.

I know you can't comment on any individual, but maybe you can shed some light on why there is such deafening silence on so many critically important matters.

People who defend the Supreme Court's decision seem to think that only "American" corporations will have the right to advertise for their candidates. Scalia apparently said that the idea that "foreign" corporations would influence us was nonsense.

It seems pretty obvious that the Supremes have opened the door to foreign vote-influence.

Am I correct? Is this an issue with some traction?

And, Mr Goodwin, each time I read your posts or read about one of your decisions, I get happier and happier that I supported you.

A "corporation" is stateless; therefore it owes no allegiance to any national sovereignty. A corporation's "official" location means nothing, just like a ship's registry means nothing.