Should be a big day in the Gate City, when the State Executive Committee of the North Carolina Democratic Party convenes to do whatever it does. What might that be, you ask? Well, the agenda is here, which provides some insight into the inner workings and hidden mechanisms of the party apparatus. Perhaps more important, here's a list of prepared resolutions that will be considered today, covering everything you can imagine, and then some. And finally, there are three "inside baseball" proposals, one of which would reduce the number of SEC members by half. Good luck with that.

If all goes according to plan, BlueNC's Steve Harrison will be on hand at the meeting to report on interesting developments and behind-the-scenes sentiment. If you have questions you'd like Steve to look into, just drop them into the comments below.

Buffalo Soldiers in the heart of America:

Getting down to business:

One of Winston-Salem's most valuable assets:

The NCDP Chairman embraces the blogosphere:

There are two things I'm interested in knowing: What exactly is the plan to recruit an army of candidates at every level of government over the next six months? Why isn't the party live-blogging or streaming this event so that thousands of Democrats all across the state can learn what's happening? 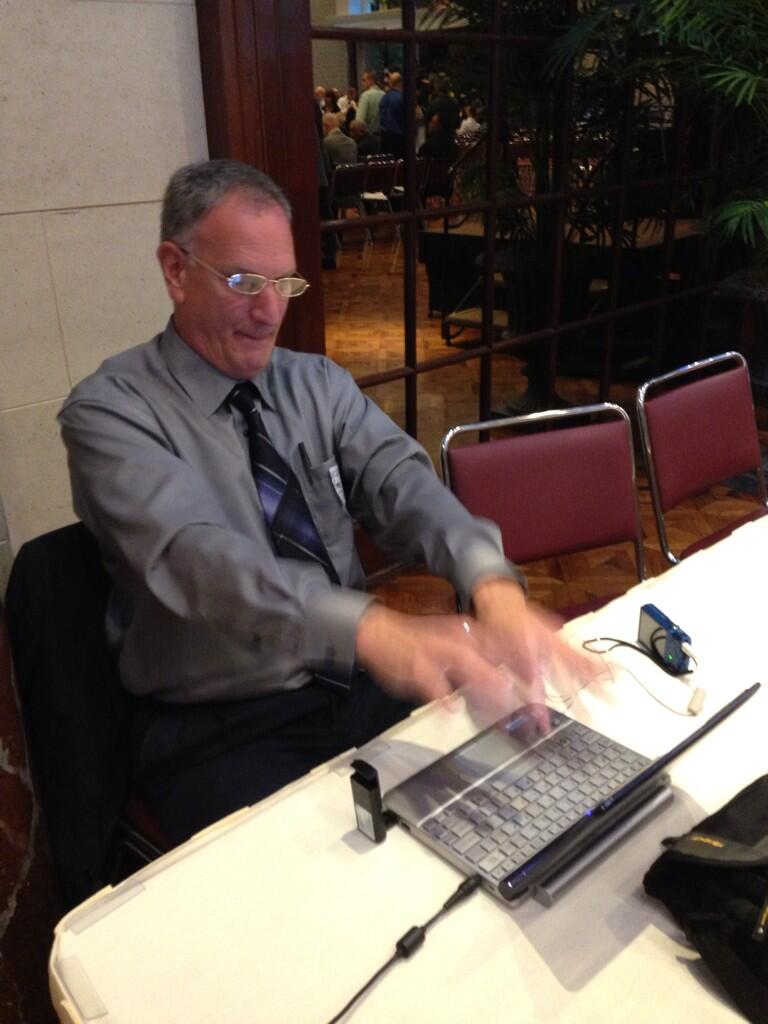 I wasn't actually typing, I just flapped my hands to make it look like I was. I'm more in the, "minutes per word" category than the other. :)

This was one of the better meetings they've had, except for a couple of things (rooms being too small and there not being enough chairs for SEC members between the rope lines and the stage, etc.).

This meeting was very well attended, and it went off without any of the drama some were expecting.

There are things that need to be discussed openly among Dems that I know I don't want Republicans to know - like the financial stuff. Or do you really think that we should totally open our playbook to everyone?

which is entirely possible, the steps to make financial information available to SEC members, that had apparently already been voted on and approved at a previous meeting, had still not been acted upon. And it appeared as if the new Executive Director wasn't even aware of this.

What gives? Is it just taking more time to accomplish, or was there some confusion about what SEC members were expecting?

Fingers crossed that the committee members get laser focused on winning elections.

I liked that I heard Randy Voller and other real grassroots people talking about rebuilding the party from the precincts on up.

There can't be enough talk about that.

If I were running for office to really be a public servant, I'd want to make sure that all the precincts in my district were organized with folks who were just as psyched about working for my election as they were for every other Democrat on the ballot from top to bottom.

That's something that's been missing from these meetings since early 2008. David Parker tried - but he had the 800-pound gorilla AKA the DNC Convention in Charlotte sucking the life out of his party-building efforts.

Do you get any sense of how the rank-and-file delegates feel about Voller? (Disclaimer: I love the guy.) He's sure been getting a lot of flack about stuff that has little to do with bringing our party back.

There's been one vote so far, and it didn't appear to be controversial. Only a half-dozen or so "nays". But there will likely be at least a few controversial ones, and that will help illuminate the level of opposition against him.

It's sometimes hard to tell, though. When the parliamentary procedures start flying, it's like trying to understand Russian. Or Klingon. Scratch that, I can actually understand a word here and there in those languages...

I've already taken a few pics, and will drop them into the body of the diary above.

If anybody reading this is here, come back to the press table and say "Hi." I'm all alone so far...

Grrr. The Photobucket has a hole in it...

We're all here and reading. I'll stop by the table to say hello. I saw Cash back there but had to find a seat.

It's nice to be treated with respect (that I probably don't deserve). Good man.

I'm hearing that the current strife in the NCDP is worrying not only NC Dems, but national ones as well. If these problems aren't solved soon, there may be two (or more) separate Democratic organizations operating in the state, with the NCDP proper being completely cut off from the bulk of the funding.

Randy just gave them a shout-out and asked them to stand, and I only counted 3 or 4 in the room (including Pat Cotham). Not sure if that's bad, but I can't imagine it being good.

Has attendees recite a pledge addressing such. I'll try to find the text somewhere.

Now talking about McCrory, and a petition with several declarations that he wants everybody to sign (1,400 have signed so far).

Talking about AFP's bus tours, and how Democrats need to hold the GOP accountable (locally and at state level) just like the Koch Brothers' puppets tried to do to us. Steve likes.

Did all the rules changes pass?

It appeared as if three of the proposed rule changes were struck from the list, and the rest were passed. I don't know the particulars, but I think it was rules 6, 7, and 8 that got chopped. These were rules that were proposed by the Executive Council in an earlier session today. I think.

As far as what the rules were, I'm trying to find out right now. Hang tight.

Other than having Patsy Keever win as 1st VC (by a smaller margin than Nina won by in Feb), many people told me they were fed-up with some of the folks who were in charge of the divisiveness. They were ready for it to stop.

BTW - where was all the OTHER stuff that we were expecting from the folks led by the bearded young man? Seems to have fizzled out if you ask me - and many others.

Perhaps it was realizing that they were fighting a losing battle since Randy has larger and still growing majority of people behind him and the work he is doing.

Patsy Keever vs Gwen Wilkins. Can't we have both? :(

Is the counting of the ballots done yet? Debra McHenry of Wake County is tweeting about the meeting. I assume she is a member of the SEC.

Good to have another set of eyes and ears on the ground there. Much appreciated.

As I said earlier - the race was certain closer than it was in February.

But again - I have to say that although we do allow nominations from the floor, I continue to have a hard time respecting any last-minute candidacy such as this.

Gwen announced not long after Nina quit, and she got some solid folks (Linda Coleman and Cal Cunningham) to endorse and support her.

I was amazed that no one else had announced by Friday morning, so I posted something to FB about rumors that June Mabry was running. I talked with June Friday afternoon and found she wasn't running. But that she heard of others who had been asked and turned it down.

Seems some folks in the western part of the state (no ages mentioned) were really looking to split the vote Gwen was going to get. But when I turned in after midnight, there was no other candidate.

I just have a hard time respecting candidates and campaigns that don't respect me enough to announce early enough to let me know perform some due-diligence on them and ask questions of the candidates and other Democrats. Do they really think that every Democrat knows every single person who has even thrown their hat in the ring for each and every public office in North Carolina?

I find nothing online about this meeting, not even an announcement of the event on the NC Democratic Party FaceBook and Twitter pages? Why?

Thanks for your contribution, Steve.

No offense, but unless it's on the social media sites, it won't get any exposure. I certainly look there first.

and I'm definitely not a party insider. Hell, I may not even be a party outsider!

I know there are plenty of folks who still believe you have to be "in person" to make things happen, and they might be right about some things. But there's a whole new generation of political activists who couldn't care less about being in person. I'm not in that new generation, but I sure do subscribe to that new way of thinking.

We should set the standard. And at the risk of sounding immodest, I would suggest the BlueNC is an example worth emulating.

There was an announcement of the SEC meeting on the NCDP website.

Clearly things aren't working as well as they were working at the peak when Jerry was Chair. But we aren't in the same position (no majority means no transactional donations coming in) to have all those people on staff.

Randy is making a good transition from the majority party that some folks still think we are to the minority party that we became after 2010 and 2012 elections that Randy Voller had nothing to do with. It's gonna take time - and we need to give that to him. And make sure that we have staffers who are on board with the changes that need to be made.

One thing I did like hearing was Robert Dempsey's ED report - where he talked about firing all but a few of the expensive consultants. That drew applause from the crowd.

Sorry to be late to the party. The river was running nice and easy, and we just got back. Thanks for the coverage ... good stuff.

Everything I try to do takes for-fricking-ever. But I haven't fell asleep yet. :)

Also, if you need my help for anything, just ask. For example, if you send photos directly to Facebook, I can grab them and pull them over here for you.

Or I could get you a good cup of coffee ... except it might be cold by the time I get there.

so we can see how tall you are!

I don't want to break it by trying to capture my ugly mug. :)

Come on. You have to prove you're really there. For all we know, you could be an alien who has taken over Steve's body ... or maybe Lizard Lick has stolen your identity.

Look up above. I figured, "Hey, if I'm going to do this, I might as well grab the Grand Poo-Bah and drag him into it."

I finally met Jeanne in person, and all you right-wing-twits are wrong. She's a sweetie. :)

Ask and ye shall receive! 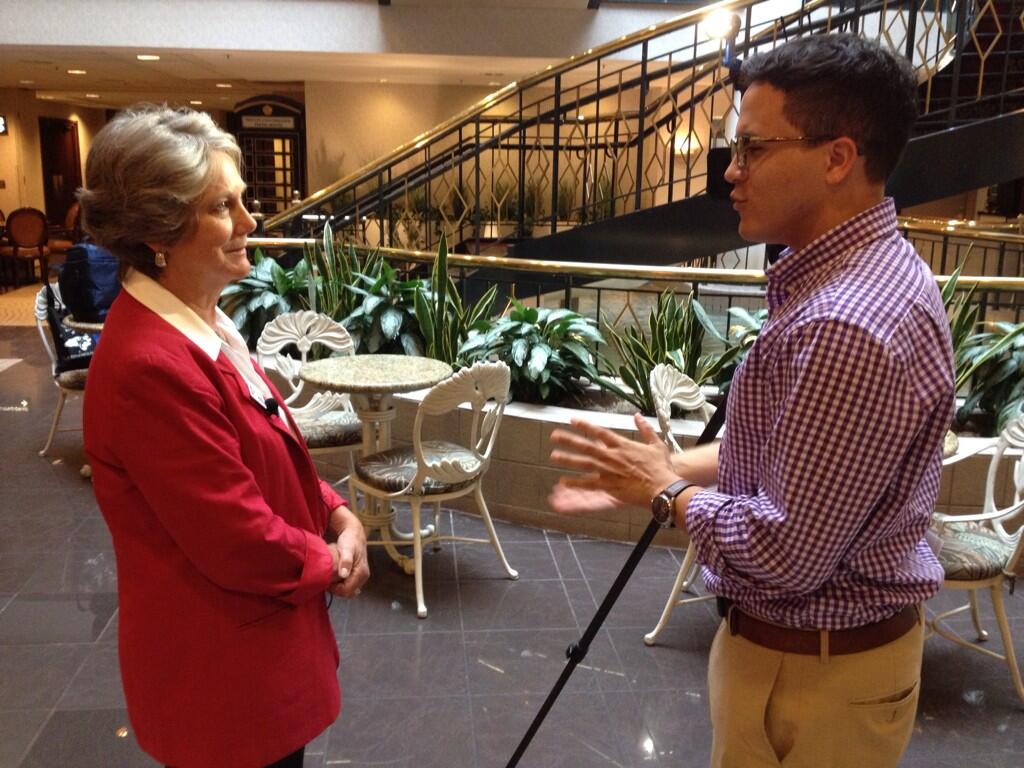 I thought all the voting was over, but it appears there are still some amendments to the POO on the table? And some motions to postpone those until mid-November. Very confusing.

Voice vote too close, going to a ballot vote.

Have been worried about that for some time now. What time is the thing expected to adjourn?

No mention of any human sacrifice, and no airborne vegetables.

Not sure when it's going to adjourn, but I'm getting ready to bail.

Appreciate you being there.

I miss all the good parties (well, most of them).

Thanks Steve, great job keeping us all informed.

I'm not so sure about that "informed" thing, though. I only understood about half of what went on today, and half of that was probably just mistaken assumptions on my part. ;)