Elaine defeat Dick Burr. That will not only give us 2 Democratic Senators from the Old North State, but two Women Senators!

This is not the outcome Bank Run Burr wanted. He may have $10 million, but even that's not enough money to buy the illusion of competence and stewardship. I'm so looking forward to Elaine Marshall taking this clown to the woodshed.

Elaine is certainly at the top of her game in running statewide campaigns. She'll give Burr a run for his money.

since the total number of votes in New Hanover County was little more than the number of registered DEM in just my precinct.

What an apathetic crock. OTOH, made our votes about 10X more meaningful. That'll show em! :-) 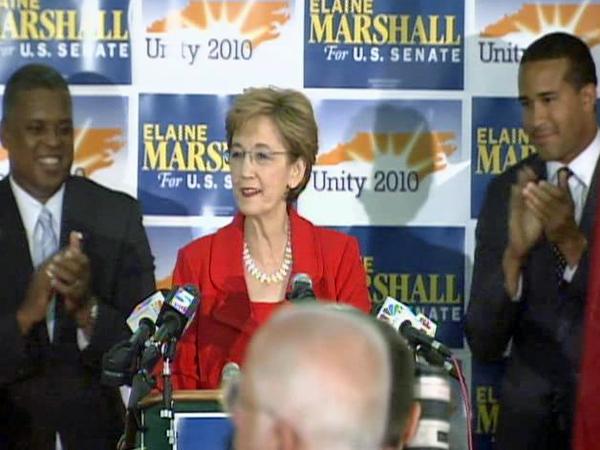 That struck me not as the standard endorsement and done type deal with Ken, but as a very real coalition. And I hope the Marshall campaign will extend the same kind of olive branch to Cal and his campaign staff with a chance to get involved and to take on meaningful positions with real responsibility in Elaine's campaign. Lets have all hands on deck to beat Burr.

I agree. There were some things that I really liked about Cal's campaign. His organizers did a bang-up job. Props to Will, Conen and the others I don't know. And of course Frank's media work is always top-notch. Hopefully Elaine will offer some of them the chance to use their skills for a few more months.

As soon as my daughter goes to college, I'll be signing up for the Marshall ground team. Somebody pencil me in now for shifts starting August 17! Shoot, maybe I'll even canvass when I drop her off at UNC-C on the 16th.

Frank Eaton & Mike Nellis on the same time... it would be a sight to behold.

I think Cal's people have definitely earned a break, I know from volunteering for & working on campaigns that they can be exhausting especially after doing one for so long, but I'd love to hear a press release or bluenc writeup or something talking about how they are incorporating any interested Cal staffers/supporters by the start of the next month.

...could probably rule the universe together! Haha. Thanks for the help everyone, and thanks to Cal and his team for running a great campaign.

Everything I've read from you today has been negative. Get some wine, a nice outside chair and an umbrella and enjoy the summer day man.....

Better yet, go inside and love on your kitties, their pictures always make me feel better.

I posted a previous suspicious comment here somewhere on him from the viewpoint of the grumpy, cynical, jaded independent that I am. But, has anyone watched his concession speech?

His speech was classy.

After that I went from suspicious, to reserving judgment on him. So props too to him and his team on that.

Just got this e-mail:

The results are in and we've got a great nominee for U.S. Senate in Elaine Marshall! No sooner had she captured the Democratic nomination than all North Carolina Democrats--led by Cal Cunningham--began to rally around her as the person to send Richard Burr packing this November.

Today Democrats are holding a unity event with the candidates to celebrate a hard-fought primary campaign and look ahead to our victory this fall, and we're inviting you to join us today on your lunch break.

Public Policy Polling has already reported that Elaine Marshall "has a strong chance" against Sen. Richard Burr, "easily the most endangered Republican incumbent in the country." The pollster compares Marshall's position favorably with that of Sen. Kay Hagan, who defeated Liddy Dole two years ago.

Whoever you supported in the Democratic primary, come to N.C. Democratic Party headquarters this afternoon and thank our candidates for a job well done and show our support for the next U.S. Senator from North Carolina, Elaine Marshall.

Based on this, Cal's statements on his campaign website and facebook, and listening to his speech last night, it looks like his next step is helping to bring Burr home.

I think Cal could make a great state attorney general some day, or beloved US Congressman. He won his home region so handily that I think he could make an ideal US Congressman somewhere around congressional district 5, 6, or 10.

If anyone in the campaign wants to get in touch with me feel free to do so. I also have connections in Ashe and Alleghany.

Take care, congrats, and let's do it to it!

Truly, from day one, the toughest thing about this race was running against Elaine Marshall.

Most of Cal's staff - Cal included - are young NC Democrats who have never known a state party without Elaine Marshall in it, and she has been unfailingly welcoming and gracious to each of us for the entirety of our political lives.

I don't regret the long, roundabout route my personal primary adventure took- I both created and accepted opportunities with the Cunningham campaign that wouldn't have been presented to me elsewhere- and I'm proud of the process that has produced a nominee that I respect without qualification.

You're the best. That bear guy ain't too bad, either.