Insurance Commissioner Wayne Goodwin and his stellar team of sworn law enforcement officers in the Department of Insurance have cracked down on insurance fraud with a vengeance. 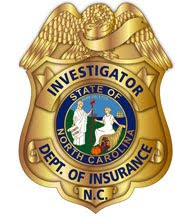 These results are not surprising in light of both the rise in insurance fraud during economic downturns such as now and the lengthy history of fraud fighting that North Carolina's insurance regulator has had over the years: Goodwin's Criminal Investigations Division is the oldest of its kind in the nation, and celebrates 65 years of service this year.

It's also important to note that an estimated 10 cents of every dollar paid in premiums goes toward the payment of fraudulent claims. To report suspected fraud, contact the Department of Insurance Criminal Investigations Division at 919-807-6840. Callers may remain anonymous. Information is also available at www.ncdoi.com.

Thanks for the update ... and the good work you're doing.

Always happy to front page a post with a bold badge of law enforcement.

PS I'm curious. Now that you're well into your work as top dog, what's the one thing you've found most surprising?