Spent a little time on the phone with Michael Tomasky and Bruce Fein who are coming to Carrboro to debate the impeachment of the president and vice president. Nice chat with each. Tomasky, who was covering the NH primary, was very straight up about the political reality. Fein doesn't want to see the administration get away with it and made a heck of an analysis of the global and local consequences.
Should be a swell time. Here's the story from The Citizen with the time and location: 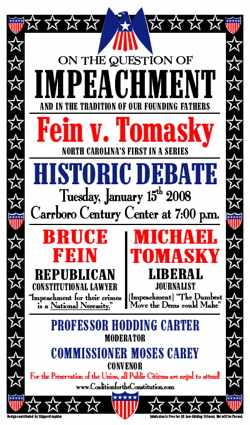 They’re promising an old-fashioned political debate in the spirit of the famed Lincoln-Douglas matches. But for Al McSurley, John Heuer and other members of the local Coalition for the Constitution, which is sponsoring the event scheduled for next Tuesday at the Century Center, the stakes are somewhat higher than who will be the next senator from Illinois.

The title of this one is “On the Question of Impeachment,” and in addition to the all-American bunting Heuer and McSurely plan to hang a banner reminding those gathered that they’re sitting in the cradle of impeachment.
The “convenor” for this debate is County Commissioner Moses Carey and moderating will be professor Hodding Carter III. While an elected dignitary and a professor may seem about right in their roles, the actual debaters might surprise you a bit. Arguing for impeachment is Republican Bruce Fein, a former justice department lawyer who was research director for the congressional inquiry into the Iran-Contra scandal and recently served on the American Bar Association’s task force on presidential signing statements.

Arguing against impeachment is liberal journalist Michael Tomasky, who writes for New York magazine and is the author of Left for Dead, a study of the intellectual collapse of the American Left.

Both men say they’re looking forward to the discussion.

In a recent interview with The Citizen, Fein said that he will argue that the president and vice president have so distorted the powers of their office that they must be challenged. The theory the Executive Branch is working on post-9-11, he said, contends “all the planet is a battlefield in and outside the U.S.” Bush, Fein said, has created in terms of national policy “a state of nature with war of all against all.”

In addition, he said, the administration’s obsession with secrecy, Bush’s signing statements that indicate he can interpret laws and choose to not obey them and politically motivated vendettas like the mass firing of federal prosecutors necessitate action.

Tomasky, in the midst of reporting on the New Hampshire primary when he spoke with The Citizen, said he does not expect to “dissent from a syllable” of what Fein will charge has been done.

“On the merits, this bunch has probably done a number of impeachable things,” he said. But there are the merits and there’s the political reality.

Barring new charges, developments or information, impeachment is “politically impossible,” Tomasky said. “It’s going to be impossible to get enough votes in the Senate.”

Knowing that, moving forward on impeachment doesn’t make sense and risks creating a backlash that could alienate some people at a time when there is a real opportunity to build a progressive majority.

Though he doesn’t agree it would be, Tomasky said there would be voters “turned off by what they see as an overly partisan maneuver.”

The two sides square off at 7 p.m. sharp. The event is free and, in the words of its excellently designed poster, “For the Preservation of the Union, all Public Citizens are urged to attend.”

More information is available at coalitionfortheconstitution.com

I guess by that time I could wear my "orange ensemble" again, but I guess it won't be the same.

This is a matter of integrity. Impeachment is the only ethical course.

Sounds like a great event, though. Bet the place will be sold out! Very excellent poster . . .

Though not much interest was expressed when I just brought it up to boy-man.

non-suck political discourse is a rarity and, given the current direction, probably is going to be illegal one of these days.

From the little editorial teaser I wrote this week:

Take either side you want, but show up at the Impeachment debate next Tuesday, January 15 at 7 p.m. in the Century Center. It’s free. See live human beings discussing politics and why it matters. Bring the kids.

Thrill to the sound of Constitutional questions, critical inquiry, reason and an unrelenting review of the current administration.

More importantly, no bloviating pundits and no commercials — truly a once in a lifetime experience.

Boy-man actually does "Lincoln-Douglass" events in his debate tournaments, and he and his friends are a lot more politically aware than most teens. He's just hungry and grumpy right now. (me too.)

So please wear something bright --- maybe orange -- so I'll recognize you.

I hardly ever even read Daily Kos. But we'll figure something out.

it's about the jumpsuits worn by so-called enemy combatants.

But I don't wear orange - I look awful in it, so I don't own any. :-D I think the boy-man may have Wierd Al t-shirt in orange that I can wear, but I have bidness meetings all day, and it would be oddly inappropriate. I will figure something out.

I just look at the pretty pitchers. :)

and it's free.
and it's in Carrboro -- just a stones throw from the OCSC.