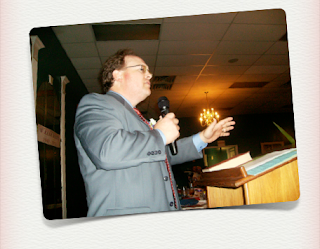 Goodwin wowed the crowd with his emphasis on how important it is to "tune in (to what's happening), turn up (the volume), and turn out (the vote)", a theme he has shared at multiple partisan events statewide.

Another theme of Goodwin appeared when he also explained his concerns about how certain right-wing ideologues were fomenting insurrection and eroding an already degraded level of civil political discourse.

Most interesting were the words of former North Carolina Governor Kerr Scott - father of Governor Bob Scott - that Goodwin shared with the crowd:

"Man never solves a problem by standing still - when a man stands still, the world goes on and leaves him behind. North Carolina has grown great because the leadership of North Carolina, throughout the years, has been inspired to press ever forward toward the goal of providing, within the ability of the people to pay for them, the maximum governmental services and facilities which are the heritage and right of a people who enoy the privilege of living under the banner of democracy.

Refusing to move forward and to meet our responsibilities of the present and of the future is nothing short of defeatism. I have no patience with this philosophy - call it conservatism, hold the line, or what you may say!

... I have talked with rich men and poor men, with farmers and with those who live in the cities and towns, with men, women, and children in all walks of life; and the overwhelming majority of them believe in the future and share the conviction that North Carolina should not throttle the future by a perverted hold the line interpretation.

In some cases the hold the line school of defeatism is actually seeking to establish a line behind the present line. Such would be the case if we failed to consolidate the gains already accomplished in the field of education." 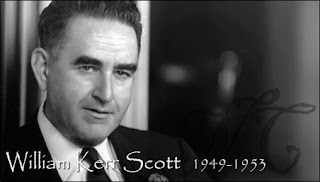 "Those words - those principles of Scott's Go Forward plan - are most prescient and timeless," said Goodwin. "Education is the roadmap of going forward - the key to success for our State."

Someone correct me if I'm wrong, but didn't Scott's farm-to-market road building program issue bonds equal to the amount of the state budget at the time?

The state budget is around 19 billion.

Where are today's leaders?

Scott certainly wouldn't be cowed by the inane deficit hysterics of today that make present day "Democrats" quake in fear.

Here's the page on Scott.

In his inaugural address Kerr Scott, who had charged that over $100 million in surplus funds was "lying idle," proposed investment of those monies and massive spending programs. His "Go Forward" program met resistance in the legislature but Scott took his case to the people by radio. In June 1949 voters approved referenda to issue $200 million in road bonds and $50 million in school bonds. Over four years the state paved more roads than had been paved up to 1949.

And the national debt at the time was a larger percentage of GDP than it is now because of the expense of WWII.

It's a shame we can't find any real visionaries today.

Instead, even the "Chapel Hill liberals" like Verla Insko are quoted in the media about how we have to cut mental health programs to balance the budget. And so-called "progressives" like Josh Stein argue for a moratorium on municipal broadband to appease telecom oligarchs that won't serve rural NC.

Governor Scott, we need you!

$200 million in 1949 would be nearly 10 times that today ... $2 billion for transportation would be huge, especially in the effort to expand passenger rail service to the mountains and coast, and boost mass transit in our metropolitan areas. And $500 million for school construction would be a good start to catch up on deferred maintenance spending for our schools.

And yes, that would put quite a few people to work.

... how many North Carolinians we'd employ, how many jobs that small businesses could create, how many tables would now have food, how many bridges that wouldn't crumble and be a danger, how many fewer potholes our highways and roads would have ... Imagine all the people, living life with a super-infusion of infrastructural restoration and expansion. You may say I'm a dreamer ... (with a nod to John Lennon and FDR).