During the past week Insurance Commissioner Wayne Goodwin visited with hundreds of voters in three more counties.

In Harnett, Wake and Mecklenburg Counties he updated audiences about the good news and good work of their Department of Insurance. He focused on how he and his team have saved consumers statewide more than $650 million during his short 18 months in office already.

Goodwin also expressed his frustration and concerns about the level of uncivil political discourse.

"Leadership means making tough decisions, decisions that are not always 100% popular but are in the best, long-term interests of this State and nation," said Commissioner Goodwin. "Leadership is not exhibited by those who rant, rave and incite folks with misinformation, and who in many instances are mere exorbitantly-paid entertainers. You know them - Limbaugh, Beck, O'Reilly, and Hannity." 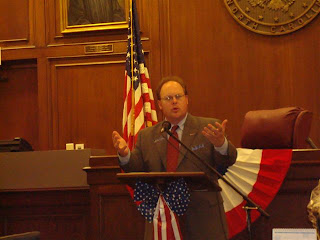 As in other counties across North Carolina the Commissioner is asked why he is so active on the stump when he is not even on the ballot this year or even next year.

"Public speaking is a large part of my job as a public official. I enjoy meeting people and answering questions and trying to solve problems. It's part of my belief in transparency in government, and giving folks public access to their elected public servants. And, frankly, it always bothers me when some elected officials only make themselves available in election years, with less frequency than Punxatawny Phil on Groundhogs Day."

Unlike Phil, Goodwin sightings continue every month in eastern, central and western North Carolina - just look for a stump and he's on it.

Please promise you'll never tell me I have to make you do your job.

I had the opportunity to hear Mr. Goodwin speak last Saturday morning at our county convention and I must say he was an inspiring speaker.