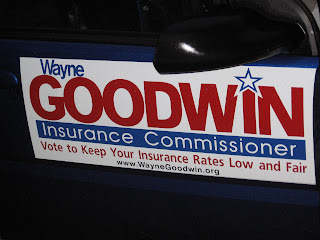 Goodwin Signs Settlement That Decreases Auto Rates and Freezes Them Until At Least 2011: Approximately One Million Policyholders to Receive Refund Checks Together Totaling more than $50 Million.

RALEIGH — Insurance Commissioner Wayne Goodwin today signed a settlement with the North Carolina Rate Bureau that will roll back private passenger auto insurance rates to just under 2006 levels; the changes will go into effect on Nov. 1, and are retroactive to Jan. 1.

The North Carolina Rate Bureau (NCRB) is an independent organization that represents all auto insurance companies in the state.

The settlement does away with the NCRB’s implemented 9.4 percent 2008 rate increase and denies their 2009 request for an additional 1.4 percent rate increase and includes an additional .5% decrease. Under the settlement, the NCRB may not file changes to auto rates until 2011, which means that the maximum allowable auto rates are locked in until Oct. 1, 2011 at the earliest. This saves North Carolina policyholders an estimated $545 million over this time period.

“I’m thrilled that North Carolina drivers will see a decrease in their auto insurance rates,” said Commissioner Goodwin. “Drivers will not only see lower rates, but many will also receive refund checks beginning in mid-2010 that may together total more than $50 million. In this economy, every dollar counts, and I am committed to protecting consumers through fair ratemaking.”

The refunds stem from a dispute between the Department and the NCRB over rates ordered in 2008. During the appeals process, the NCRB implemented an interim 9.4 percent rate increase that went into effect on Jan.1 of this year. In cases where insurance companies charged policyholders more than the rates determined by this settlement, insurance companies are required by statute to refund the difference between the rates charged and the settled rates, with interest.

“With this rate rollback, the effect is that I will have capped rates for the five year period spanning from 2006 through 2011,” added Insurance Commissioner Goodwin.

The Department of Insurance has consistently issued small or no rate increases, and in many cases has ordered rate decreases. Combined, this has potentially saved drivers more that $5 billion over the last 25 years.

To learn more about this terrific news for consumers, a sample of TV video and newspaper coverage is here, here, here, and here. The Department's official press release is here.

I remember meeting you at a BlueNC event and hoping that your apparent populism was the real thing. Looks good so far!

miss chatting with you. I guess that's what happens when you get elected to statewide office. You're doing a great job. Thanks!

... now that the legislative session is nearing a close (purportedly)! I miss you all but have continued to check BlueNC everyday for the latest posts.