Jane has taken to rowing the length of the lake and back most days. It's almost a two-mile loop. This morning she was greeted upon returning by our black Muscovy. It's hard to row with a ten-pound duck sitting on one of your oars.
___________________

This morning brought news that the Trump administration doesn't have the competence god gave an animal cracker. Most people knew that already, but the sheer magnitude of the dysfunction is startling:

The Trump administration has stumbled in its initial push to implement the $2 trillion coronavirus aid package, with confusion and fear mounting among small businesses, workers and the newly unemployed since the bill was signed into law late last month. Small-business owners have reported delays in getting approved for loans without which they will close their doors, while others say they have been denied altogether by their lenders and do not understand why.

Continuing on yesterday's theme -- Lies and the Lying Liars Who Tell Them -- here's the most comprehensive list of provably false statements made by the Orange Menace. When someone writes the book on this sad sage, these false claims will be Appendix A. The list is being curated by the Toronto Star. It's a doozy.

The Star is keeping track of every false claim U.S. President Donald Trump has made since his inauguration on Jan. 20, 2017. Why? Historians say there has never been such a constant liar in the Oval Office. We think dishonesty should be challenged. We think inaccurate information should be corrected. And we think the sheer frequency of Trump’s inaccuracy is a central story of his presidency.

If Trump is a serial liar, why call this a list of “false claims,” not lies? The short answer is that we can’t be sure that each and every one was intentional. In some cases, he may have been confused or ignorant. What we know, objectively, is that he was not telling the truth.

Every time Trump lies, so does Thom Tillis. He's really that much of a Trump echo chamber.

Is it wrong to hope they both overdose on hydroxychloroquine? 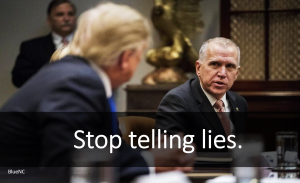 Can ducks carry covid19? Saw where a tiger in a NYC zoo tested positive. I dunno....google comes up blank

They seem to be more resilient against Corona, but keenly susceptible to cirrhosis of the liver, what with the vodka drinking.

This duck is definitely smarter than Donald fucking Trump. Better looking too.

The centerpiece of Trump's C19 response is a loan program that HAS FAILED IN EVERY WAY POSSIBLE.