Buncombe, Watauga and Macon County landslide/soil hazard maps illustrate the region’s unstable land conditions. The data collected by the North Carolina Geological Survey shows past slope movement, where landslides are likely to originate, and where these debris flows will travel. Henderson County landslide maps are pending. Jackson County will follow. 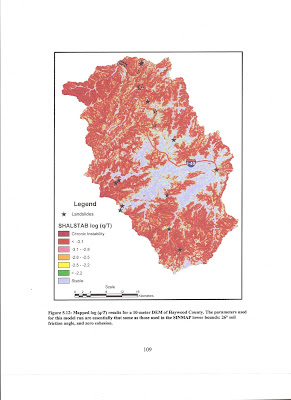 Although not recorded on subdivision plats, or referenced on property listings and in real estate contracts all steep slope Western North Carolina building sites are designated unstable. To clarify: steep slope is land on or above a 15% grade. Structures below these defined steep slopes are also at risk.

Western North Carolina mountain real estate home sites are susceptible to earth movement because of geologic features and water-reactive soils. Geologists and engineers urge professional assessment and expert planning when naturally unstable slopes are altered for residential development. These critical recommendations have not been legislated.

Since there is no insurance available in Western North Carolina to cover earth movement property damage, purchasers should condition their contracts on the results of home site stability studies.

The absence of landslide insurance is not the only financial issue. Most Western North Carolina mountain subdivision roads are privately owned by homeowners’ associations. In the event these roads are damaged by landslides, property owners are obliged to pay for the cost of repairs through special assessments.

There have been three legislative efforts to establish a measure of control over steep slope building practices but none have been successful. The importance of the Safe Artificial Slope Construction Act is discussed in the following reprinted article.

When back-to-back tropical storms hit the mountains with heavy rains in 2004, the saturated soils triggered more than 140 landslides. Some were small, others big, but all pointed to how vulnerable some mountain slopes are to the forces of nature — namely gravity.

It spurred Rep. Ray Rapp to start thinking about a way to make building on steep slopes safer. Rapp, a Democrat who represents Haywood, Madison and Yancey counties in the state House, is pushing for oversight of construction on the steepest of slopes.

Rapp is not a fan of the “caveat emptor” motto that has prevailed in WNC’s development boom. Buyers simply don’t know to beware, he said.

“All they see is a million-dollar view,” Rapp said. “They are looking at the view, not at their feet — and what is under their feet could be highly detrimental to their safety.”

Rapp is fighting an uphill battle, however. The powerful lobbying arms of the Realtors and Home Builders associations are opposed to the safeguards Rapp has proposed.

“Those are very powerful lobbies in Raleigh,” Rapp said. “That really put everybody on the defensive.”

Rapp has failed so far to garner the support he needs for his bill, called the “Safe Artificial Slope Construction Act.” Only four other legislators signed on to the bill — two from the mountains, one from Raleigh and one from Greensboro. Rapp said he needs more support for the bill among mountain legislators before those down east will vote for it.

“They want to see legislators in the mountains get together. If we are at best divided then a number of them will listen to the Realtors and Homebuilders,” Rapp said. “The first thing we have to do is get support across the mountains.”

But it’s proved a tough sell.

“There have been all of these attacks that we are trying to stop development in the mountains,” Rapp said. As a result, support among mountain legislators is mixed, Rapp said.

“We had one mountain legislator who supported it initially, but folks back home got so stirred up that he backed off,” Rapp said.

The bill failed to go before the House of Representatives for a vote in 2007. Instead, it was handed off to the House Committee on Environment and Natural Resources. The committee could kill the bill or send it on to a vote. In doing so, they could leave it as is or change it.

As part of their review of the bill, the committee is holding a public hearing in Asheville on Jan. 10 from 4 to 7 p.m. at the Enka Campus of AB Technical College.

The main argument Rapp hears is money. Under his bill, developers would have to solicit an engineer to draw up a slope construction plan when building on slopes greater than 40 percent. The added expense would drive up home costs. On some terrain, it might result in fewer houses.

“The only thing I hear consistently is a concern that it might hurt economic development if there were any limits put on some of this slope development,” Rapp said.

In most mountain counties, developers answer to no one. They don’t have to file a plan with the county before putting in roads and home sites, and no one checks up on their work afterwards. The state bill would force these laissez-faire counties to start monitoring slope construction.

“It’s something that many of the counties have been unwilling to tackle,” Rapp said. “The whole point is to say to the counties, these are the minimum standards that you will be required to adopt.”

Rapp initially wrote the bill to apply to slopes of 25 percent or greater. But in an attempt to curry favor from opponents, the threshold was lowered, so the oversight now only applies to construction on slopes greater than 40 percent. The compromise was unsuccessful in appeasing his opponents, however.

The bill would also require Realtors to disclose whether property is at risk for a landslide. Landslide risk maps are being drawn for all mountain counties by the N.C. Geological Survey. Only six counties have been completed so far, Macon County among them.

In the absence of landslide risk maps, the bill would have required property owners to do their own risk assessment and disclose the results to buyers. The measure would apply only to land with a slope greater than 40 percent.

The real estate lobby was opposed to the idea. Rapp said it would cost roughly $1,200 to $1,400 for a landslide risk assessment for the average property owner.

“The Realtors argued that would drive up the cost so much people won’t buy the land,” Rapp said.

So Rapp compromised. Instead of being forced to do a landslide risk assessment before selling, Realtors could instead disclose that they don’t know whether the property is safe to build on — leaving it up to the buyer at that point to do a risk assessment if they chose.

Rapp believes the extra cost of hiring an engineer to develop a slope construction plan and do a landslide risk assessment are worth it when slopes over 40 percent are involved. Rapp pointed to a Haywood County subdivision called Hunter’s Crossing where the soil beneath the homes slipped, cracking their foundations and rendering the homes unsafe. Insurance doesn’t cover landslides, so the homeowners are stuck paying mortgages on homes they can’t live in.

“If you go to the eight homeowners in Hunter’s Crossing and ask them: ‘It would have cost you $1,400 more to have an engineer’s report on your property. Would you have paid for that?’ the answer is yes, ” Rapp said. “It is one of those penny-wise pound-foolish arguments.”

Besides Rapp, the only two mountain legislators in the House of Representatives who have signed on to the bill are Phil Haire, D-Sylva, and Susan Fisher, D-Asheville. Haire represents Jackson County, Swain County and parts of Macon and Haywood counties. Fisher represents Buncombe County.