Bringing back an old feature designed to showcase right-wing idiocy in general, but with a special emphasis on people who go out of their way to bully and demonize those most vulnerable in our society. And just to go ahead and get him out of the way, here's your nut job for Tuesday, April 12. Mark Robinson.

For those unfamiliar with the supersized bigot, you're lucky. There's nothing endearing about the man, who has ironically captured the hearts of extremists everywhere. His messages of hate, violence against women, and hypocrisy are just what today's racists have been looking for, all bundled into an Uncle Tom package with a Praise Jesus ribbon for good measure. Right-wing nut jobs refer to him as one of the "good Negroes," and I suppose that's right, if by "good" you mean hatin' gays, hating public education, hating women and lovin' guns. Hell, they even forgive him for paying for an abortion years ago. 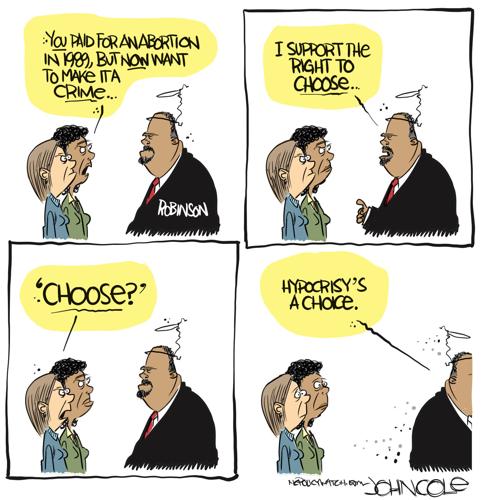 The Rev. Martin Luther King Jr. spoke at the New School in New York on Feb. 6, 1964, about the Civil Rights movement and how people react to calls to serve. “Negroes are human, not superhuman” King said. “Like all people, they have differing personalities, diverse financial interests and varied aspirations. There are Negroes who will never fight for freedom. There are Negroes who seek profit for themselves alone from the struggle. There are even some Negroes who will go over to the other side.”

“These facts should distress no one,” King explained. “Every minority and every people has its share of opportunists, traitors, freeloaders and escapists. The hammer blows of discrimination, poverty and segregation must warp and corrupt some. No one can pretend that because a people may be oppressed, every individual member is virtuous and worthy.”

“Decency, honor and courage” King said, are the dominant characteristics to look for. The historic struggle for progress, King told the audience, has always had “masses of decent people, along with their lost souls.”

demagogue. Started by running his mouth about gun control at a City Council meeting, and he didn't even own one at the time. Thought he might get one some day, or some similar horseshit. Of course the gun-nuts immediately fell in love with him, and he's been running his mouth ever since.

I think we dismiss Robinson at our own peril here. Sure, he's an opportunist and a buffon, but his dangerous rhetoric has real-world consequences.

Vice reports that right-wing chat boards are full of calls for violence against specific teachers or administrators that are LGBTQ affirming.

This is part of a regular pattern. So much so that, when I came out over thirty years ago, other LGBTQs warned me to pay attention to the news. Invariably, some politician aping for reelection on the right or tv minister huckster needing some cash for a new jet or home, would ramp up attacks on LGBTQs and actual violence would follow. The message I always heard when when you see gays being attacked in the news, watch your back carefully.

Robinson spouts this hate-speech to further his own political career and grift for campaign cash. And the Republicans basically ignore it to get the fundies and bigots to vote for them.

But this rhetoric has real-world consequences. People - perhaps many people - will be hurt or killed because of it.

I just loath him and his evil agenda.