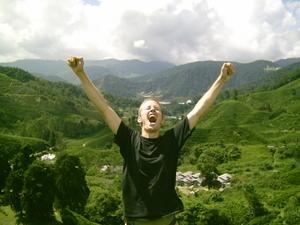 Tension crackles through spring's damp cool. Voters across western North Carolina are on the edges of their stumps, stools, and pews. The Red Cross has opened a nail-biting triage unit in Methylvania County. Suspense drives local blog commenters named Anonymous to rant at Scrutiny Hooligans, "What in the hell is wrong with you people?? This has got to be the identity crisis that signals the end of time. Go Mike Morgan!"

It's time for the off-year primaries, the fuddy-duddiest election event in American politics. Only the most interested people in America are paying attention at all. Drinking Liberally, that weekly gathering of the most interested, interesting lefties in the blue oasis of Asheville, gathers this week at Jack of the Wood to roll out the primary voting rolls.

Clyde Michael Morgan brings his quixotic (Do NOT talk about this) express around for another try. Heath Shuler is raising helmet loads of money and courting the voters west of the Balsams. Charles Taylor is flailing through a series of ethical misdeeds that's left his credibility shattered. John Armor is counting on Taylor bowing out after the primary in the hopes that the Republican Party will then nominate him. 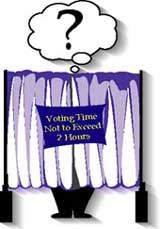 The other, quieter races that may end up affecting you more than any Congressman are also on the ballot. Who's your fave Supreme Court candidate? Court of Appeals candidate? What do you mean you don't know who's running?!? Good thing for you that Drinking Liberally will furnish handy Judicial Voter Guides courtesy of the NC Board of Elections. The guides, after a thorough skimming, also make excellent tablecloths or large-beer coasters.

Come on out to Drinking Liberally to celebrate the primary season with like-minded, fun-loving left-leaners. We'll be taking predictions on the vote spread between the victors and the also-rans and puzzling out post-primary strategy. Everyone's welcome. Every Thurday, 7-10pm, Jack of the Wood, Downtown Asheville.