Just back from a Saturday morning trip over to Newport, TN, where Knoxville-based Remote Area Medical (RAM) is holding one of its medical “expeditions.” 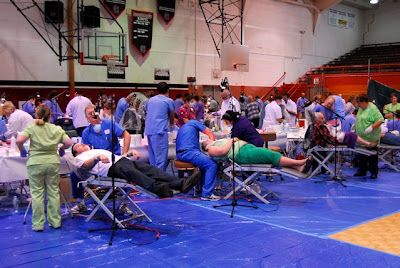 The earliest patients arrived at Cocke County High School on Thursday to secure a numbered place in line for Saturday's free health care clinic. RAM expected to treat about 480 patients on Saturday and about half again as many Sunday. (They stopped accepting new patients about 9 a.m. Saturday morning.)

Most of the cars in the high school parking lot were nondescript. Some had people still sleeping in them. Others had blankets or sleeping bags inside or airing out on the hood. A few autos were missing grilles or glass and looked as if people lived in them. Some of those held animal carriers. RAM’s Newport expedition included veterinarians who provided pet services.

RAM’s patients are Americans without health insurance or jobs that provide it. Most need eyeglasses or dental care. Some exiting the gymnasium had rolls of gauze where teeth had been. One man held an ice pack to his jaw. A mother told us that while she has insurance through her job, her husband and kids do not. But adding them to her policy would take her entire monthly take home pay.

RAM does much of its work in Tennessee because the state allows doctors and dentists licensed in other states to practice within its borders for these events. North Carolina is not one of those states, Brock said in an e-mail earlier this week, otherwise residents in WNC’s remote western counties might receive a visit from RAM.

We noticed that October 3-4, RAM will be visiting the Appalachian coal country town of Grundy, VA, hometown of NC Governor Bev Perdue. Maybe the governor would support changing the rules in cash-strapped North Carolina to allow the state’s growing number of unemployed and uninsured a chance for the kind of free care RAM brings to Grundy.

It's a shame this service isn't available for people in need in this state.

I had seen a tv story on this group, and was actually trying to find them online. I had forgotten the name, and medical expedition on Google leads to a lot of awesome trips to Mongolia, but not this organization! I signed up for their newsletter. It is a disgrace that any state would refuse them permission, and I hope our legislators here would see a very easy win in passing such a bill. It is truly humiliating that a country this prosperous needs to rely on such an organization, but I am glad that they are there.