Involved in a little journalistic civil-disobedience?  Very good to see reporters pushing back.

NOTE TO THE GOVERNOR'S OFFICE:  Hello? Need some Windex?  :)

when President Obama brought up the Ledbetter case.  IMHO he showed his animosity toward women with the few words he said about it after Obama spoke....the case was 20 years late and a trial lawyers dream.

It was indicative of his general disdain towards women, and I remember feeling horrible for his wife at that moment.

It seems to me that businesses weren't prepared to deal with all that extra money in a responsible way.

Being a republican, you have to know that I am in favor of reduced taxes, especially for our small business folks.  I've seen a number of percentages on this on the Web, but the average is that somewhere around 65% of the people in the U.S. that are employeed by private sources are employeed by small business.  Yeah...there's some differences on what "small" means here.  And, a majority of new jobs being created (low as that is) comes from small businesses as well.

However...and this is tough to say...in our current economic situation in the U.S., I truly believe that to be able to fund some of the measures that are needed to head the country's/state's ships in a positive direction, we're going to have to raise some taxes.  I don't think those taxes should fall on our businesses (at least not the small businesses) for the reasons I've stated.  But, if anyone truly believes we don't need to increase government revenue, they're fooling themselves.

A couple areas I see justifiable here are is what has been dubed "sin" taxes.  I'm not a smoker so it wouldn't affect me to increase the price per pack on cigarettes.  Smoking, to me, is voluntary.  So, if you decide to smoke, then you decide to do so regardless the price per pack.  I think we'd see a great deal of increased tax revenue by increasing the tax on tobacco.  Yes, I know the implications in North Carolina..being a tobacco state and all...in my opinion, I doubt we're going to see any further reduction in smoking/tobacco usage even with as much as a $1/pack extra tax so I don't really see the impact those against my suggestion present.  The other area I believe is justifiable is in alcohol.  Now, I do enjoy a cocktail before dinner and a couple brews playing golf.  If the tax goes up on what I drink, I'm still gonna drink the same amount....and that's my choice.  I honestly think that alcohol needs a higher tax.

No, I don't believe these suggestions will cure everything...but it's a start.  I'd like to see increases in taxes through innovative and justifiable placement on the burden on this.

especially marijuana, would solve half the budgetary problem ... between reducing costs of law enforcement / incarceration ... and taxing the heck out of sales.  Agree completely with your point about alcohol and tobacco.

Man...I sure wish you would have been with me last weekend when I was having this discussion with my son's boss.  I'm not going into my past with regard to marijuana (gotta plead the fifth on that), but I just can't understand how it's somehow more "dangerous" or "unhealthy" to smoke a little weed than to drink alcohol.  The biggest argument I have is that marijuana isn't addictive (at least I've not seen any legitimate studies saying so), but AA was specifically set up to deal with the addictive nature of alcohol.   That being how I feel, so you gotta know I also believe that we should remove marijuana as an illegal substance and have the states control it and TAX THE HELL out of it.

I'm just getting SO agreeable here, aren't I? 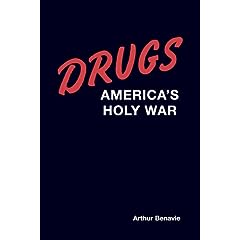 It's by a friend of mine and it has all the fact and figures you'll ever need to smack down any drug warrior. I'm hoping to get Dr. Benavie to come here for a live blogging session in the next couple of weeks. He's an economist, and his look at the War on Drugs is as objective and honest as you'll ever find.  Just click the book!

would your friend be interested in live blogging with us?  That is after we live blog about Jesus Swept.

Especially if I'll be his keyboard buddy.  Which I'm happy to do!

How do we move this forward?

to carry it on their personal blog.  We could announce the book club and the first live blog at kos and other sites too with a diary and a link.  Anyone else have any ideas?

Regarding Obama's directive regarding abortion:

Will any of these funds be directed towards educating the entitlement class on how to stop having babies they cannot support. Abortion is a touchy subject that I would rather stay away from. However, I would rather have tax payer dollars go towards abortion clinics than to irresponsible people who breed like rabbits and contribute to a continuous cycle that will lead our country down the tube. Has anyone seen the movie Idiocracy? It's a terrible movie with a good premise but it touches on exactly what is happening across the globe. The poor and ignorant are mass producing while educated people with sense and decency are not reproducing at a slower rate. It's scary!

What a world we live in.

We need to tax alcohol just high enough so that it will discourage the weekday binge practiced by so many I know and yet low enough to keep people from having stills.  Same with cigarettes.   We could also tax an abortion seeker AND the doctor to help with the cost of teen pregnancy prevention programs.  This might curtail  devisiveness also.  They would still have the freedom of choice.   Just thinking out loud.

Or, more properly, the having  of babies since most one-week olds are likely to be pretty short in the cash-flow department.

I like your thinking out loud.  Seriously.   It's an interesting challenge we're facing, finding all these balances.

Hey...if one day they find out that there could be significant "tax dollars" to be gotten by taxing the use of the Internet...I'm gonna be a sunk sucker !!

in a serious way. I know there is a line on the NC State tax form to declare all you buy, BUT, who keeps accurate records all by themselves???

they look at it as good money thrown at bad problems

the Democratic party looks at it as a safety net that provides people with a helping hand and dignity in old age.  I think it was Linda who asked what would the r's do if they had to support their own parents in retirement?!

But all the while, government is to blame for the ills of the world. I can't help but shake my head at that.

Appreciate that, James.  I haven't even read YOUR book yet..so, I'm behind.  This one will certainly be on my list.

I'm sure that there are facts and figures about how many people in our country are incarcerated because of simple drug possession and so forth.  This is an abomination, in my view.  Kids "get in trouble"...What's that saying..."there but for the grace of god goes me"????

That's my big problem with this entire subject.

Finally saw my book in a real bookstore (Quail Ridge Books in Raleigh) for the first time today. Stands out, don't you think?