Ask for a description of landslides and most people will characterize them as fast-moving mountain slope events. What they don’t know, is that there is another type of groundbreaking landslide.

These other earth-movement phenomena occur below the surface, are present world wide and slowly destroy everything built on them. Underground landslides have various names: Some call them ancient landslides, engineers use the term deep-seated circular/rotational failures. In Western North Carolina, geologists refer to them as "Big-Slow Movers."

Subterranean landslides can move of their own accord but generally they are prodded into action by changes in the weather or alterations to the landscape. Once these forces are energized, they are difficult to control. The Aldercrest-Banyon Landslide is a classic example of the destructive power of a "Big-Slow Mover."

The Aldercrest-Banyon neighborhood was completed in three phases, 1971 through 1979. When the city of Kelso planning commission granted the permit for the project they knew that a dormant landslide existed on the building site. Nine years later the landslide reactivated. As a consequence 137 homes were condemned. 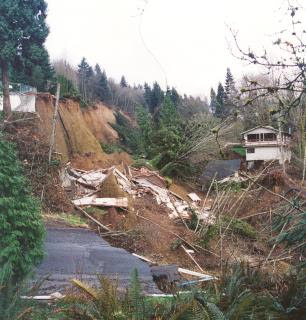 "CONDEMNED: Could this happen to your home? " Macon County News April 1, 2010

The Macon County News reported that a big slow-moving landslide has been identified near the town of Franklin. Rick Wooten, senior geologist with the state Geological Survey calculates this active landslide encompasses 13 acres and is positioned 35 feet below the surface. This landslide is endangering homes and completion of Craftsman’s Village, a commercial/residential development project. 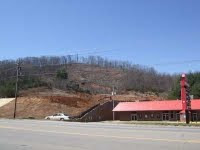 Excavation at the Craftsman’s Village development on Georgia Rd. may have contributed to both a major slope failure on the property (visible above) as well as to the slow-moving slide affecting the property to the south of the development (left side of this picture). Geologist Rick Wooten says the recent clear-cutting above the slide “is not going to help the situation.” 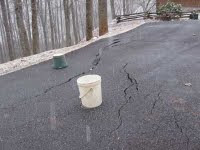 When county officials were first called to investigate cracks in the driveway of Mike Boggan’s property on Blossomtown Drive on February 12, they observed a drop of 2 to 2.5 inches. By the time officials returned a month later, the crack (called the scarp) had increased to 16 to 18 inches. The crack in Mike Boggan’s driveway is growing by an average of half an inch a day. Boggan, whose house was condemned by the county on March 18, says he is “at a loss.” Excavation at the neighboring Craftsman’s Village development could have contributed to the slow moving slide, say officials. But unpermitted development has continued on the slope.

In the fall of 2005 land under the Hunters Crossing Subdivision, a six-unit condominium mountain complex, began to move and so did the homes' structural supports.

The cause of the movement under the Hunters Crossing condos was determined by Alpha Environmental Science Inc.'s investigative team. In summary the company's engineers found that the 2001-built subdivision home sites were sitting on a then-dormant, now-active landslide. The following is a reprint of the engineering report provided to Hunters Crossing property owners:

RE: Slope Evaluation for Hunters Crossing in Waynesville, NC AES # 5664.01

The Hunters Crossing slide area involves a side hill slope that extends approximately 250 feet in a north south direction parallel with Lickstone Road and extends approximately 300 feet uphill from the east side of the road. Representatives of Alpha Environmental Sciences Inc. as well as representatives of the North Carolina Geological Survey has visited the site on numerous occasions. During these visits a number of cracks and scarps have been identified in the surface of the failure area. Some of these cracks are in the vicinity of the homes at the top of the failure zone. At least one old apparently inactive slope failure scarp was located downhill in the middle of the zone. Distress in the form of foundation cracks and wall displacement were identified in the homes at the top and bottom of the failure zone. The field observations started in November 2005 and have continued to date. Additional building cracking and ground disturbance have appeared during these visits and new signs of distress have appeared in and around the homes at the bottom of the zone adjacent to Lickstone Road . Slight movement detected by the crack monitors on the foundations of 73 Hunters Crossing on February 8, 2006, reveal that the slope is still in motion.

The two deep (50’) borings progressed at the top of the zone did not encounter rock. A boring taken at bottom of the slope encountered rock at 8.5 feet below existing ground surface. Based on the depth to rock and the type of distress observed in the field, it is our opinion that the slope movement is a deep-seated circular failure. A deep-seated circular failure occurs when the vertical load on the uphill side of the failure zone exceeds the internal soil strength along a failure plane combined with the vertical load on the downhill side of the zone.

Our evaluation indicates that prior to the current movement the vertical forces combined with the soils internal strength were very close to the balance point. Any event that could momentarily reduce the internal soil strength could cause a rotational failure to occur. The type of events that cause this condition would be the infusion of large amounts of water, either from periods of intense rain or a water line failure. Also, a seismic shock such as the 3.8 magnitude earthquake that occurred on August 25, 2005 two miles southwest of Hot Springs, NC could have caused this change in strength. Unfortunately, the reduction in internal strength can for all practical purposes be permanent or take an extremely long time to return to a balanced point.

Because of the large amount of soil in motion, the standard technique that could possibly arrest the current movement is a stabilizing berm constructed on the flat area east of Lickstone Road. This treatment would require the removal of the homes in this area. The soil berm would be about 70 feet deep perpendicular to the creek and twenty to thirty feet high. Techniques that would attempt to stabilize the slope mechanically would involve anchor tie backs drilled into the soil or rock beyond the failure zone. This type of system has been discussed with contractors that have visited the site. The anchors are estimated to cost at least one million dollars to design and install. However, due to the variable nature of all soil deposits, it has to be stated that an engineered mechanical anchor system might not work.

It is our recommendation that the homes effected by the slope failure, if they are in a condition where they can be moved, be relocated to sites where slope problems do not exist.

Since there is no state landslide data base, it is impossible to determine the number of Western North Carolina homes condemned or damaged by earth movement. Financial loss is incalculable due to the fact that homeowners' insurance policies do not cover landslide losses.

What is known is that planning boards throughout Western North Carolina have willfully, and without disclosure, exposed property owners to known and easily identifiable landslide hazards.

The issue of Western North Carolina real estate hazardous-land disclosure was raised in 2007. The merits of the Safe Artificial Slope Construction Act are still being studied.

Those involved in hazardous-land sales: developers, planning boards and real estate agents, understand the financial consequences of a state-mandated Landslide Disclosure Statement. They know that if the public were apprised of landslide risks, it is unlikely that many would choose a Western North Carolina mountain home.

Thank you for this, Lynne.