In case anyone needs reminding why the NCGOP wants to spend tax dollars during a budget crisis to solve a non-problem.

NEW DEAL?? NO DEAL!!!   WE'RE CLEARING EVERYTHING OUT!

From the Des Moines Register:

A snafu during a legislative debate where a microphone was turned on captured banter between two Iowa GOP leaders, who also joked about a “give-a-handgun-to-a-schizophrenic bill.”

Republicans this week revived a proposal that would allow Iowans to carry weapons in public without permission from a sheriff, without background checks and without training requirements.

The legislation, House Study bill 219, is known as “Alaska carry,” which is law in Alaska, Arizona, Vermont and Wyoming. Rep. Erik Helland, R-Johnston, is listed as one of the three legislators on a subcommittee assigned the bill.

Transcript after the jump.

It's what every American should be asking themselves this week. The Tea Party too.

Do you stand with the modern-day British East India Corporations and their masters (the Kochs, the Olins, the Bradleys and other royals that want to unmake the American Century and rig American democracy like they rigged the financial markets)? Or do you stand with the people in your community? Who do you serve?

Eliminating public education has appeal for small-government conservatives, for libertarians opposed to policies that smack of “collectivism,” and even for the anti-secular religious right. Eliminating unions has appeal for Republicans. Public employee unions are among the few remaining large institutional competitors. But there is something else, too. The conservative push to defund public education in America – through school vouchers, charter schools, budget cuts, etc. – isn’t just about politics, ideology and fiscal restraint, but about money and class.

For over 230 years the genius of our founders' self-correcting democracy has expanded the original narrow voting franchise from white males to blacks to women and to eighteen year-olds. The Democratic Party has done some self correcting as well. Now once again we have to protect and defend voting rights Americans won with their blood, sweat and tears.

As early as tomorrow, North Carolina's new GOP-led General Assembly is preparing to introduce a bill requiring citizens to present a photo ID to vote. WRAL reported on Friday:

An analysis by the State Board of Elections obtained Friday by WRAL News shows that at least 700,000 registered voters in the state don't have a driver's license or photo ID issued by the Division of Motor Vehicles. Records for another 300,000 people need further checking to determine if they have a license, elections officials said.

From the National Association of Free Clinics event going on now in Kansas City, MO:

Health care is front and center, but so is organizing.

Sen. Arlen Specter yesterday admitted to the assembled bloggers that the GOP had formally decided to try and destroy Obama before he even took office in January. He wasn’t betraying any confidences, he said - it was public knowledge – but so formal a decision was news to many in the crowd. 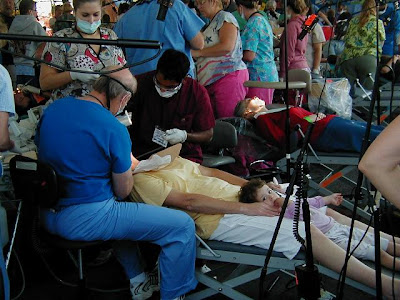 I posted "The Uninsured Line Up For Care In Rural Virginia" today on Huffington Post about the Remote Area Medical health care expedition I attended Saturday in Wise, VA.