Today (Monday), Attorney General Eric Holder is expected to announce a lawsuit against the State of North Carolina over the voter suppression bill passed by House Speaker Thom Tillis and the North Carolina General Assembly:

In the North Carolina lawsuit... the government will challenge requirements in state law that eliminate the first seven days of early voting opportunities and eliminate same-day voter registration during the early voting period...

The Justice Department challenge also is aimed at a provision eliminating the counting of certain types of provisional ballots by voters who cast ballots in their home counties but do not vote in the correct precincts. 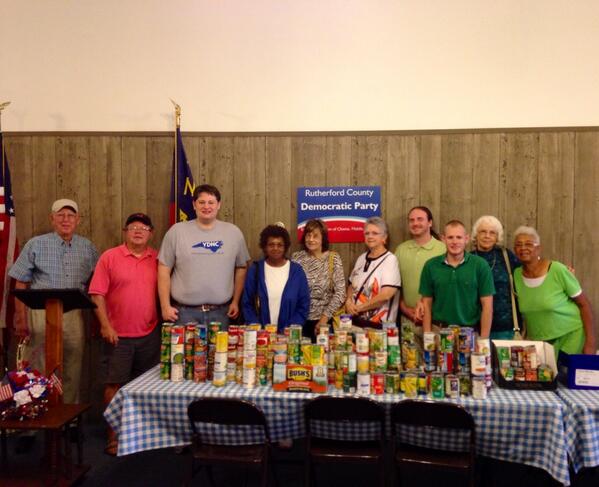 I'm posting this blog from Rutherford County - 300 cans have already been collected across Western North Carolina. Please sign up at YDNC.org to donate and come out and see us!

As part of our Bootstraps Tour, the Young Democrats of North Carolina are collecting 5,000 cans of food for local food banks across the state. We need your help to reach this goal.

Please sign up to help give hungry families a hand up this weekend.

While we'll be taking the NCGA to task for 'cutting off the bootstraps' of poor and working-class North Carolinians, we don't want to talk about Poverty without doing something about it. Please help us lend a hand.

Justin Conley nailed it today with an e-mail on behalf of YDNC:

Republicans aren't making it any easier for poor and working-class families; instead, they're removing the means families have to escape poverty. Our General Assembly has "cut off the bootstraps" of the working class by killing jobs, shifting the tax burden to our hardest-working citizens, putting education out of reach, and cutting access to the ballot box. Republican policies are symptomatic of a moral poverty -- the idea that the path to prosperity should look more like a tightrope than an open road.

Crossposted from the YDNC Blog...

Since Governor Pat McCrory signed House Bill 589 into law on August 12, our State has witnessed a litany of attacks on voters - especially young voters.

There are a lot of ways to talk about the North Carolina General Assembly, and a lot of issues to talk about. So I've decided to document some resources from the Young Democrats of North Carolina you can share to help tell the tale of a weak Governor and a legislature that's gone off the rails. I encourage you to share these far and wide!

First, this very week our Governor broke a big promise:

The 4th Annual Gantt-Watt Reception will be held at 7:00 PM on Saturday, July 20 at the Charlotte School of Law, 2145 Suttle Ave, Charlotte, NC. This year's event will focus on honoring the long and illustrious career of Congressman Mel Watt. This will be an evening to remember as Democrats from across the country come together to show their appreciation for all that Congressman Watt has accomplished for the 12th Congressional District, North Carolina, and our country.

Today, the Young Democrats of North Carolina released it's newest :30 web ad, "Take a Hike," on GrowNCWrong.com - a website launched to fight back against the "Tillis Tax Hike," HB 998. HB 998 was passed by Speaker Thom Tillis (R-Mecklenburg) and NC House Republicans under the guise of tax reform, but the proposal will raise taxes, on average, on the bottom 95% of North Carolinians. GrowNCWrong - a play on the pro-Tillis Super PAC - is telling the truth about Tillis's middle class tax hike and the NC House's plan to divest from everything that makes NC great.

Please check out our new video No Appetite from YDNC on Vimeo.

Funding a new Voter ID law is not as high of a priority for North Carolina voters as saving teacher assistants according to a Public Policy Polling poll commissioned by the Young Democrats of North Carolina.