I used to work at UNC-TV back in the 80s. It was a good organization then, and it is a good organization now. My wife, my daughter and I have supported the network off and on for more than 25 years. So it is with considerable regret that I announce my intention to withdraw my support effective immediately. The naming of Orson Scott Card to the UNC-TV Board of Trustees by Phil Berger is an action I cannot and will not support.

I understand there will be critics of this action. Some people will say, "Hey, you're only hurting the people who work there. They didn't have anything to do with this." That may be true, but if we turn a blind eye to such actions, we are simply telling Mr. Berger there are no limits to what we will put up with.

Others will say that Card is only one voice among many on the board, and that his influence won't be felt. I disagree. Card is a talented writer and a vocal advocate for the things he believes. He will be heard.

Still others will argue that is a freedom-of-speech issue, that diversity of voices leads to truth and we need some conservatives on the board. I find that argument convincing. Indeed, why stop with Card? Shouldn't we have other racists, bigots, homophobes, flat-earthers, misogynists, birthers, Creationists, and white supremacists on the board? Imagine all the fun they'll have running the network into the ground.

For better or for worse, how we spend our money these days is just as important as how we vote. And given the gerrymandering in North Carolina, it may even be more important. I'm not giving another penny to UNC-TV until Mr. Card resigns his seat on the board.

I was writing this as you were composing your message. I guess we just see things differently.

If I blamed every organization which has appointments from Berger or Tillis, the list would go on indefintely, as many non-profit Boards and Commissions funded by the state fit this category. Let's put the blame where it belongs: on Berger, not the group which is bound by statute to accept Berger's appointee.

In response to the people who have expressed their objection to the recent appointment of Mr. Orson Scott Card of Greensboro to the UNC-TV Board of Trustees, UNC-TV offers the following points of clarification. It is important to understand that the composition of the UNC-TV Board of Trustees is established by state statute, and the members are appointed by either elected public officials or by the University of North Carolina Board of Governors. There are 22 members. These are unpaid volunteer positions, and the board serves in an advisory capacity. The UNC Board of Governors is the actual governing board of UNC-TV.

Mr. Card has been appointed by the President Pro Tempore of the North Carolina State Senate.

There have always been board members with diverse opinions and backgrounds on the UNC-TV Board of Trustees, and the membership of the board is always changing. What has not changed is UNC-TV’s commitment to its mission of providing excellent public television programming for all the citizens of North Carolina.

It's a close call, but given the extreme nature of this particular appointment, to remain a silent and committed donor is not something I can do. A line has to be drawn somewhere, and I'm drawing mine here.

The Tillisberger thinks it can do whatever it wants without consequence. And there are more than enough people around to show them they're right.

to an organization that would tolerate the mere presence of Card on its board is not something I could bring myself to do, regardless of how he got there. 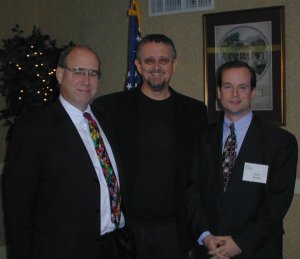 I can see both points of view here - Card's presence on the UNC-TV advisory board has been foisted on the organization by the extremist Republicans in the legislature. You want to send a message that putting an extremist bigot in such a position isn't acceptable. However, not donating to UNC-TV will hurt the organization and push the extremist Republicans to put more pressure on UNC-TV to turn more hard-right.

I would suggest joining with people you know that are upset by the decision and talking with a lawyer or financial advisor to set up something like a trust fund to collect monies you and others would normally donate to UNC-TV. The idea would be that this fund would only be given to UNC-TV for supporting works by NC or Southern-based LGBT documentary filmmakers for broadcast on UNC-TV. If UNC-TV isn't willing to accept the donation after a certain period, it would be given to another related charity with similar goals, such as the NC Gay and Lesbian Film Festival.

I've not given to UNC-TV in many years, mainly because of the way they're so timid about LGBT and progressive issues. I would, however, donate to a fund like this.

What worries me is that your reaction is precisely what they want.

They are going to destroy public television anyway. It's just a matter of time.

Includes TV, education. water, health and many others (such as "...policy polling").