This piece of North Carolina's natural heritage in Henderson County is up for sale, and the State is considering purchasing it in order to preserve it as a park.

Much of the acreage has been maintained in pristine condition, and some scientists have described Hickory Nut Gorge as one of the most biologically diverse areas in the state. Todd Morse said he and his father shared a desire for the next owner to “carry on the legacy of stewardship that we’ve started here.”

But those who wish to preserve the park’s natural state are worried that if the new owners require a greater cash flow than current traffic is generating, some level of new development will follow.

“Even five years ago, there wasn’t the development pressure that all of a sudden there is now,” Mr. Morse said.

I do not know what we can do now (other than purchase the property yourself), but when something comes up, I will be here asking for help. 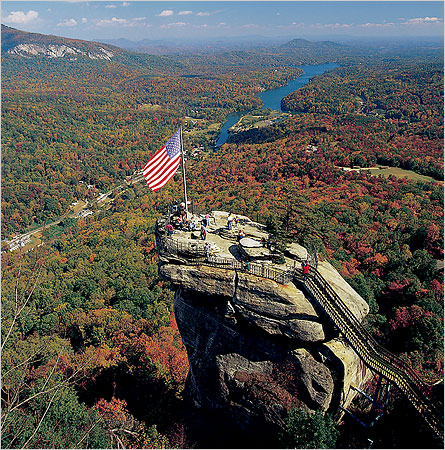 and I agree completely. My fear is that a purchaser will require greater cash flow than the area currently will support. We need to rally and contact our state senators, state reps and the governor to encourage them to keep this beautiful area as pristine as it is today and if that means state ownership, then we need to snatch it up before someone else does.

This is where hubby took me on our honeymoon in 1973! I am from Miami, Fl and wanted to see the mountains.

This is an important piece of landscape and shouldn't be developed any more than it currently is.

a second honeymoon is in order. :)....just in time for touring NC with Momo

Please go and take the actions asked for.