CNN is running MAJOR ESCALATION across it's webpage. If there are "acts of war" occuring, the Middle East could be in for a huge shakeup. This doesn't bode well for anyone.

As if more violence in the Middle East isn't enough, reports are already surfacing of Iran being invovled. Its beginning to feel alot like "weapons of mass destruction" are right around the corner...

The only thing that could make this situation better is for further instabilty in the Middle East to lead to a massive rise in oil prices, bringing $3.50 gallons of gas before the hurricanes can.

And we aren't even the families caught in the middle of it.

It makes it all the more important that we send people to Washington who are more concerned about leading the country than they are lining their own pockets or those of their corporate buddies.

when the power went out for a few seconds.

The points I wanted to make:

1. Having Condi Rice call on Israel to exercise restraint is laughable. We, the United Hypocrites of America, established the sterling standard for pre-emptive war. Israel's just doing what we did.

2. The US is the ONLY country even remotely supportive of Israel's actions. A fine corner we have painted ourselves into.

3. George Bush is 1000% responsible for this whole fucking disaster. 1000%. He wanted a permanent state of conflict and now we have it.

Welcome to World War III, brought to you by the idiots in the Republican party, including Elizabeth Dull, Dick Burr and all the Republican lapdogs representing North Carolina.

In Straslund, Germany, President Bush said Israel has a right to defend itself -- but he urged it not to weaken Lebanon's government, in place since 2005 elections that led to the withdrawal of Syrian troops. (Full story)

"The democracy of Lebanon is an important part of laying a foundation of peace in that region," Bush said during a stop on his way to the Group of Eight economic summit. He added that Syrian President Bashar al-Assad "needs to show some leadership toward peace."

Bush sees Lebanon as a foundation for a wall between Israel and Syria. While Syria's occupation of Lebanon was wrong it maintained stability in a Saddam Hussein kind of way. With Syria gone after the "Cedar Revolution" the country's multi-denominational democracy was free to realize the instability of a balance of power shifting to a growing and radicalized muslim population. Israel has been waiting for an opportunity to build the Great Wall of Southern Lebanon and Hezbollah has provided it like a co-dependant enabler.

will be whining about partisan attacks like mine in this moment of dire consquences for the world. Why can't we all just pull together behind George Bush because world peace is at risk.

The only reason I'd get behind George Bush is to push his sorry ass off a cliff.

NOTE TO THE SS: This not a threat to commit violence of any kind. I would not push George Bush off a cliff because someone down below might get hurt.

SS. Hurt someone below. Funny.

Poor taste on my part. I don't want anybody to die as a result of US policies, not even George. I apologize.

Someone will start bombing Damascus next. The only question, will the bombs be coming from Isreal... or Nebraska.

W would love to distract America some more by adding to the "Axis of Evil."

He may be an idiot, but that would be some pretzel. I think he'll stand by his comments (I wish I could say actions) of 'democracy leading to peace', which has led him to lend his "good" name to the flailing government in Lebanon after Israel pointed a finger at the Lebanese government. I think Bush will hold and hope the situation doesn't escalate into all out war. Rummy and Co., no doubt, have a different perspective. If I'm wrong, and its worse than just bombs from Nebraska, it could spell the immediate withdrawal of some troops from Iraq!

It would be a shame though to bomb such a beautiful city. As it's stood for 4500 years of existence, however, I believe it wouldn't be the first such shame.

Is that Damascus? It is beautiful!! I had never seen a photo of Damascus before. Farthest east i've ever been is Portland, Maine. :)

That is really something.

while she was in the Peace Corps. It was awesome and it churns our stomachs to know we won't be going back in the near future - Thanks GWB.

The Islamic world has been building cool places for millenia, but again, too bad none of us will be able to see it anytime soon.

You said it all.

The Lebanese government was just beginning to get on its feet. Even the U.S. government admits that the government of Lebanon cannot control the Hezbollah forces in Lebanon. If Israel pushes too far, the Middle East could disintegrate into chaos with the American troops caught right in the middle.

Are Hezbollah extremists behind these kidnappings? If so, then we ought to ask how Israel is going to create any sort of stability. If Lebanon, Syria, and Iraq turn against Israel, with a wealthy Iran funding training for those who seek to end Israel, what ought the United States do?

I don't dispute that Iraq policy has helped to create the situation there, but it's certainly bigger than that. And I don't doubt that there are elements of the Republican Party that seek war with Iran before the '06 elections.

What is a sane response to what's happening? Israeli soldiers are attacked and kidnapped on their own soil, and then Israel goes in buns'a'glazin' and escalates the strife. I'm not sure if this is a war, or some awful thing that looks just like it.

If we withdraw troops from Iraq right now, are we leaving Israel to be picked at by Hamas, Hezbollah, Al Qaeda, and whatever else the scary, dangerous folks are calling themselves these days? If we are to help to 'defend' Israel, what role will this aggressive administration want to play?

Democrats must retake the House and Senate in '06 in order to get some people in charge who are willing to seek stability.

It's a frightening time, and that's what Karl Rove likes. Let's keep our heads and think our responses through. Soon the Rovians will be attacking Democrats as weak and unwilling to come to the aid of our allies. Neither is true, and it's important for us to articulate a strategy beyond, "Stop. Doing. What. You're. Fucking. Doing."

Off the top of my head:
- U.S. intervention is a poison pill in the Muslim world. We aid Israel militarily and ensure they can defend their borders.
- Leaders of every Muslim/Arab nation ought to be condemning terrorists and their tactics at least as often as they condemn Israel's response. We can encourage this through diplomatic ties.
- Warn Lebanon and Syria of further isolation through sanctions.
- Help to build a Palestinian economy through international aid - if Hamas will cease their attacks. Economic prosperity is the fastest road to stability - then they can work on government and politics. This is how it's played out in Northern Ireland.

I don't have many good ideas about this, do I? Do the Democrats? Or is George W. Bush's Department of Defense the only entity with a bank of ideas, good or bad, that we'll see paraded across the world stage in the coming months?

Yesterday a friend sent a clip of Bush's press briefing (if you can call it that) in Germany. The point was that our Decider in Chief was much more interested in the Roast Boar he'd be having for dinner than any of that mess happening in the Middle East.

Today's Washington Post has a Link Textmore extensive article by Dan Froomkin on a exchange between a reporter and Mr. Bush's obsession with the the pig mentioned above.

Who knows what Turd Blossom has up his sleeve, but it looks for now like W is handling the continuing deterioration of all life in the Middle East with the special aplomb seen in his "Out Front" leadership on Katrina; i.e. - He's decided to ignore it and hope it goes away ... a strategerry sure to add to W's reputation as a take charge CEO.

How quickly can you get to Washington?

I agree that this will provide Republicans with the "we're in the middle of a war and we don't want to change leadership now, do we?" opportunity. The good thing is that this isn't a presidential election.

Not only do we as a party need to address this in the ways you mentioned above, we need to keep our eyes on the individual races. If our military is going to remain stretched to its limit during a time of crisis, which of the Representatives has voted FOR the military and which have voted against - whether it's pay, benefits, VA, protection? I guess it's time to do a little digging.

The ideas you've posited 'off the top of your head' are reasonable ones and the chatter I've seen from Dems and Pugs alike are similar. But there's a big problem: Anything coming out of George Bush's mouth is DOA. The Bush administration's credibility on anything is zero and no one really gives a shit what he has to say.

The invasion of Iraq was indeed a poison pill . . . or maybe more accurately, a poison seed. All the fruits that derive from it are poison too. I'm not saying we started the Israeli invasion of Lebanon, but we prepared the ground for it to happen. We destabilized the region so that bad actors everywhere can push all the limits without fear of the world community being aligned against them. The world community has looked at the US critically and determined that we are increasingly irrelevant. Our military foray in Iraq has proven that there are no military solutions, which is sad news for us since we've squandered our diplomatic and moral leadership.

Israel has lost their damn minds. 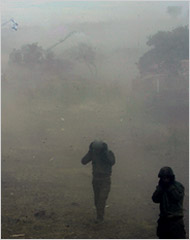 Over at Daily Kos. This one is definitely worth three minutes of your time.

"The president is not going to make military decisions for Israel," White House press secretary Tony Snow said. He said it was unlikely that either side would agree to a cease-fire now.

You cant take that out of context.

In my opinion for the people, is this not a little defeatist of the government that represents the people of a country at one time to called to be the "last great hope for humanity"?

Seriously, this administration better get off their goddamn high horses and do something. Israel will not benefit from all out war despite what neocons believe.

Be just, and fear not.