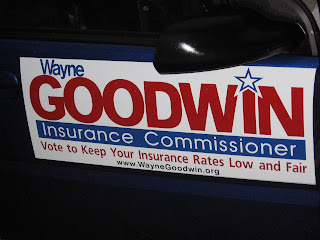 "We're the Largest State in the Whole Country with the Lowest Insurance Rates," He Says

"I'm pleased that North Carolina remains one of the most affordable states in the country for auto insurance and definitely the best value in the southeast," said Commissioner Goodwin. "This ranking comes just a few months after I signed a settlement that rolls back auto insurance rates to 2006 levels, freezes them until at least 2011, and gives approximately $50 million back to many North Carolina drivers in the form of refund checks."

Contributing to North Carolina's low auto insurance rates is the state's unique ratemaking process; North Carolina is one of the only states to negotiate standardized, across-the-board rates for all companies, depending on territory. The rate set by the Insurance Commissioner is the cap, and companies writing traditional policies can only deviate from this rate by offering discounts. As a result, most drivers enjoy some sort of discount.

Commissioner Goodwin added, "this good news for North Carolina families and businesses is especially welcome in these challenging economic times."

The NAIC report compares the costs of personal automobile insurance in all 50 states and the District of Columbia, based on 2007 data. North Carolina's neighboring states rank as follows: Tennessee:14th; Virginia: 17th; South Carolina: 30th; Georgia: 31st.

"There should be no question about it: Considering this news and my announcements about recovering $20 Million for consumers in 2009 and saving NC drivers $545 Million over the next two years, North Carolina's Commissioner of Insurance and its Department of Insurance fight strongly everyday to protect consumers with fair ratemaking," added Goodwin.