Sabers are rattling from Washington D.C. to Tehran. Iran reports they have enriched uranium. Sy Hersh reports U.S. military strategists are drawing up plans for a nuclear first strike. Saudi Arabia is asking the Russians to intervene. Our troops are amassed in the neighboring morass of Iraq. The news media is unflappably blase about the possible use of nukes. The Republican Noise Machine is gearing up for 2006 Congressional elections. We've got a President in Iran who hates Jews and believes the world will end in the next 2 or 3 years and a President in the United States who loves Jesusy freedom at the barrel of a gun and believes that the world will end whenever he's damn good and ready.

I need a drink. 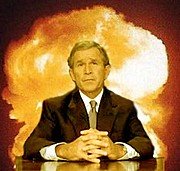 Asheville's Chapter of Drinking Liberally, that weekly gathering of luscious lefties and left leaning lushes, comes together this week as the drumbeat of war hums beneath the cries of immigrants, the calls for the President to come clean on leaking lies, the Abramoff scandal, the New Hampshire phone-jamming scandal, and the uncivil war in Iraq.

What to do with President Mahmoud Ahmadinejad of Iran? He's a teatotalling bellicose radical and has made his defiance loud and clear since his unexpected election win. He's hell bent on manufacturing nuclear weapons and buying missiles from the Russians. He's a scary dangerous man. 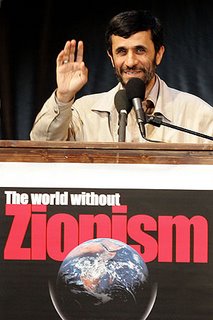 What to do with President Bush? He's a teatotalling bellicose radical who hasn't met a war he wouldn't send us to fight. He's hell bent on manufacturing more nuclear weapons while thinking of using the nuclear bunker busters we've already created. He's a scary dangerous man.

Come down to Jack of the Wood and weigh in on how we can stop both of these men from creating a fuckup so monumental that Iraq will look like a screaming success. Or just come down to drink heavily and vent your spleen with people you like. We'll be waiting for you either way. Drinking Liberally, Asheville, NC, every Thursday, Jack of the Wood, 7-10pm.

this calls for drinking excessively....and I rarely, ever drink. Oh My!

i'm not even catholic, but any friday off is a good friday. and since friday is the day after asheville dl, i plan on getting good and plowed. :)

Very funny, Screwy. And much appreciated.

Just found this blog through MyDD. Im a former NC boy living in Dallas TX and I also host the Addison chapter of DL. So hats off to Asheville!

From Deep In The Heart Of Texas

From Deep In The Heart Of Texas