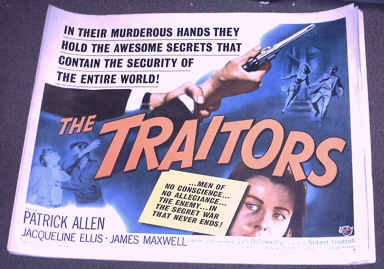 Conservative pundits, bloggers, and representatives are saying that Bill Keller and the New York Times ought to be tried for treason. No, really. They're actually saying that. What's got these folks so atwitter?

The New York Times ran a story this week explaining a program that identifies terrorist elements by tracking international banking through something called the SWIFT program. This, of course, is on the heels of the NYT story about the domestic spying/terrorist surveillance program.

"For people to leak that program and for a newspaper to publish it does great harm to the United States of America." - President Bush

"We're at war, and for the Times to release information about secret operations and methods is treasonous," - Republican Congressman Peter King

"One almost thinks the liberal press would delight in the next act of terror on US soil almost as much as they seem to relish body counts of our military." - Tigerhawk Blogger, CardinalPark

"If America is going to wage a war against terrorism, it must indeed act on all fronts. In 2006, it needs to act on the home front and direct its attention to those whose war on the administration is unconstrained by the espionage laws of the United States." - Powerline blogger, Scott Johnson

Wow! The Neocons were already busy fighting Al Qaeda, Saddamists, Insurgents, and Liberals. Now they're going to declare war on the Free Press as well. You couple those wars with the theocons' War on Gay, the paleocons' War on Mexicans, and the O'Reilly army's stalwart defense of Christmas, and there's nowhere left for the peace-seeking among us to lay our heads. 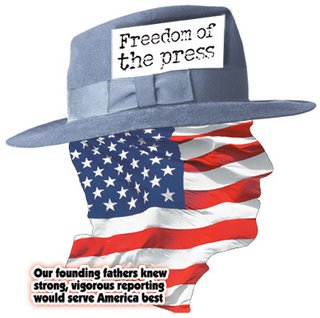 Drinking Liberally, that weekly gathering of Constitutional scholars, journalistic wunderkinds, and unabashed patriots, meets again this week to discuss the dynamic tension between the Freedom of the Press and Security Interests of the nation. Though we've come to learn the "secret" program "exposed" in the New York Times has been public for years, the principle is still floating out there for consideration: When is the public's "Right to Know" overshadowed by national security? Is anything fair game for publication by a free press, or are there limits that ought to be voluntarily or forcibly adopted? When does journalism become aiding the enemy? Is there a war on journalism being conducted by a secrecy-obsessed Bush administration, or does President Bush have a valid point of view in condemning the New York Times for printing this information?

I'm still working on this, and that's why I'd like to get together and hash it out. At the risk of revealing sensitive information that may get you killed... Drinking Liberally happens every Thursday night from 7-10pm at the Asheville Brewing Company on Coxe Avenue in downtown Asheville. It's a casual assembly of left-leaning individuals with a passion for politics. Everyone's welcome, so come see who you've been missing!