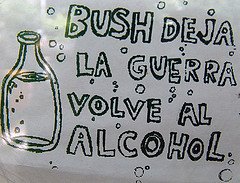 George W. Bush is a busy bee. After inviting his Iraq War Team to Camp David to tell the decider about how steadfastly he must stay the course, Bush whisked the Press away to the Green Zone in Baghdad. Bush stalked and strutted, "the full jaunty" according to Joe Klein. Then he was back to tie 9/11 to Iraq to the War on Terror to Iran while Karl Rove and his hive of busy bees got the word out. Stay the course or surrender, the Republicans say. Which side are you on?

Stay the course. Or surrender. 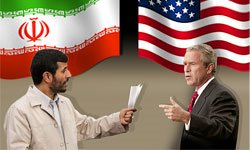 A Joe Lieberman backer compared Democratic Party faithful to terrorists. Dick Cheney told us again about how the last throes of the insurgency are here. The Japanese decided to pull out of Iraq. Days after Iran's Ahmadinejad announced that talks about talks were making progress, Bush issued an ultimatum. No talks will take place until after Iran stops their uranium enrichment. U.S. Soldiers are kidnapped and murdered by Al Qaeda. Car bombs explode. The Taliban rise from the ashes in Afghanistan.

2,507 American soldiers are dead, and another 18,356 are wounded. Forty thousand Iraqi civilians are dead, and 1,100 Iraqi Security forces were killed just last month. 21,000 U.S. troops are activated for another Iraq deployment. Rumsfeld insists that it's easy to focus on the bad news. Bill O'Reilly announces that if the U.S. wants to win, then they ought to run Iraq the way Saddam did. Ann Coulter openly despises 9/11 widows for speaking against the President.

Papers reveal that Bush inquired about the torture of a mentally ill Al Qaeda member, whose 'tips' kept Homeland Security scrambling after wild geese for months. Three Guantanamo Bay detainees killed themselves, one who was scheduled to be released the following week. They were described as "the worst of the worst" and accused of waging "asymetric warfare" by taking their own lives and ending the interrogations.

Russia is arming Iran, Syria, Sudan, and Venezuela. North Korea is testing another ballistic missile they claim can hit the west coast of the United States. The U.S. military activated our missile defense system, never proven to work and costing $10 billion dollars per year to operate. India anxiously awaits Congressional passage of a deal that will allow them all the nuclear fuel the U.S. can provide.

There's more, but I can't go into it all right now. I need a drink. Who's with me?

Drinking Liberally, that weekly alliance of peace loving political thinkers, gathers again at the Asheville Brewing Company at 77 Coxe Avenue to sift the laughs from this chaff and to wonder aloud what we can do to change the trajectory of the conservative hawks.

Would working for a change in Congressional leadership be enough? Would it come soon enough? Should we be marching in the streets or battening down the hatches? Like Terry Schiavo, is the corporate media being force-fed by the administration?

It's heady stuff and scary, Liberal Drinkers, especially when we let all these frightening facts linger in the cobwebs and shadows of our consciousness. This Thursday, bring your fears into the light buy them a drink. Fear and anxiety are overcome by empowerment and action... or by ingestion of copious amounts of alcohol. Whichever you prefer, come down to Asheville Brewing Company for another week of casual, left-leaning conversation with people as thirsty as you are.