The campaign winds are blowing. Back in 2004, before the Swift Boat Vets emasculated John Kerry, we knew that the candidates we saw in June would be radically transmogrified by the Republican Noise Machine and the Democratic Party's complete misunderstanding of what they were up against. Without, in this space, getting into all the whys and wherefores of Kerry's narrow loss, know that the same winds are rising in the east.

Every politician in America will be attacking their opponents in growing strains of nationalism and patriotism, and the Mighty Wurlitzer of pundits and editors drunk on cocktail weenies and self-aggrandizement will amplify only the voices they deem relevant. By November you won't recognize the candidates anymore. Catch phrases, sound bitelets, and stagecraft are already accelerating past any whisper of policy arguments. Identities are created and destroyed in these sweltering months from primary to general. Cut and Run, Retreat and Defeat, Obstructionist, Party of No - the labels are thrown like adhesive confetti to see what'll stick. Is Charles Taylor an unethical failure or an embattled power player? Is Heath Shuler a conservative Democrat or a carpetbagging impostor? The whispers are growing, and by October you won't be able to hear your own thoughts over the rhetorical cacophony. 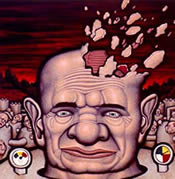 How can an informed citizenry maintain perspective through the media maelstrom to come? First, we're Drinking Liberally.

Drinking Liberally, that weekly gathering of media-savvy lefties, on-the-ball believers, and idealistic transformationalists, will face the facts of a media driven electoral theater of the absurd. Get your facts straight now, Liberal Drinkers, because facts will be as quaint as the Geneva Convention before voting time comes. The network of right-wing publications, think-tanks, and broadcast outlets that regurgitate the day's RNC talking points is cranking up the wind machine, planning for a Katrina style bushwhacking of all things liberal.

Drinking Liberally, open to all, meets every Thursday from 7-10pm at the Asheville Brewing Company at 77 Coxe Avenue in downtown Asheville, one block south of Jack of the Wood. We're a casual, conversational, left-leaning drinking group with a passion for politics. See you there.