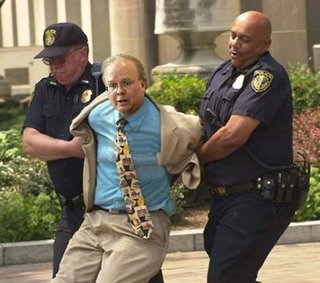 Last weekend, while some of us were still trying to thaw out after the Tourists game last Thursday (which was a better turnout than many of us had expected), Truthout.org reported that Deputy White House Chief of Staff "Hot" Karl Rove, a favorite dartboard target among the left leaning set (as well as a growing handful of right-wing luminaries), has been indicted on charges of perjury and lying to investigators related to his role in the CIA leak case. According to the report, Special Prosecutor Patrick Fitzgerald spent the better part of a day meeting with Rove's attorneys, one of whom was instructed to tell Rove that he had 24 hours to "get his affairs in order,' at Patton Boggs last Friday, where the indictment was reportedly served.

Whether that report was accurate or not (Truthout is sticking to it), that was all it took to send the blogosphere careening off of itself like particles in a supercollider. Even those who aren't bloggers are waiting somewhat impatiently for that news to officially break.

There has been a load of interesting news coming down the pike this week - the coming Senate confirmation hearings of former NSA chief Gen. Michael Hayden (which should be made more interesting if NSA whistleblower Russel Tice is allowed to testify); giant telcos like BellSouth and Verizon issuing denial statements regarding their reported handing over of phone records to the NSA; Bush's Oval Office address regarding what many armchair pundits and strategists (including myself) successfully predicted would be the wedge issue du jour during this election cycle, immigration... yet here we are, waiting patiently for Fitzgerald to appear before the gaggle of news cameras and reporters that have been in a holding pattern since last Friday outside the Federal Courthouse where the Grand Jury is meeting and make the announcement.

All of this waiting can be enough to drive you to drink!

That's where we come in.

As of press time that much-anticipated announcement hasn't happened yet, but don't let that stop you from joining the Asheville chapter of Drinking Liberally @ Jack of the Wood (95 Patton Ave., Downtown) this Thursday night at 7:00 pm! We'll either celebrate Rove taking the "perp walk", scream about what's taking so long for the Feds to "frog-march" his butt out of the White House, wonder out loud about any secret West Wing machinations that will allow ol' "Turd Blossom" to get off with a slap on the wrist, or discuss anything else that might be eating at us. No matter what happens, you'll be in good company, with good food and good beer to boot! Plus, I have it on good authority from an anonymous source that someone will be leaving us a pile of cool bumper stickers to hand out...

We hope to see you there!